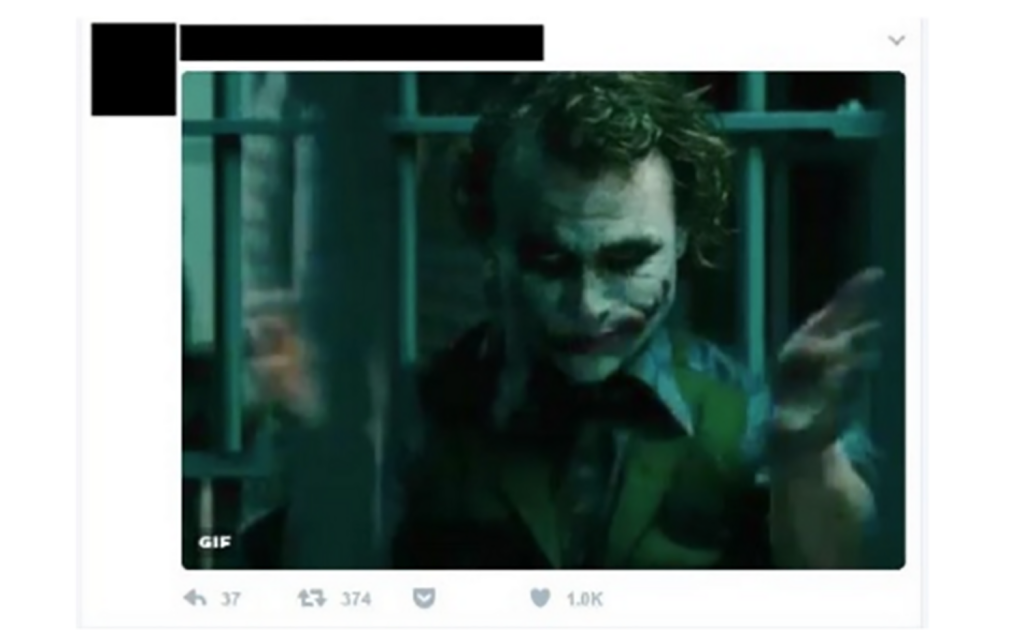 Ole Miss on Tuesday included a screenshot of a gif of The Joker from "The Dark Knight," which was posted to Mississippi State linebacker Leo Lewis' Twitter account after the school was charged with more football violations earlier this year, as part of its response to the NCAA's amended NOA.

Head coach Hugh Freeze’s failure to monitor and a lack of institutional control are the most serious charges Ole Miss is challenging in its response to the latest set of charges handed down by the NCAA in its investigation of the football program.

Also sprinkled throughout the school’s 124-page response made public Tuesday are efforts to cast doubt on the credibility of Mississippi State linebacker Leo Lewis, who’s become a key figure in the Rebels’ long-running probe.

Lewis, who will be a redshirt sophomore for the Bulldogs next season, is a subject in five of the 21 allegations against Ole Miss, four of those being Level I, or the most serious, charges. Lewis is only referred to as Student-Athlete 39 in the response, but he’s been widely reported as a person of interest in the NCAA’s investigation.

Ole Miss removed all doubt as to Student-Athlete 39’s identity by including a screenshot in its response of a post from Lewis’ Twitter account earlier this year. Shortly after Ole Miss received its amended Notice of Allegations in February, which added eight more charges to run the total number of alleged rules violations to 21, Lewis tweeted a GIF of a clapping Joker from the “The Dark Knight” movie — an indication, Ole Miss argued, that Lewis was taking pleasure in harming Ole Miss after being granted limited immunity from possible sanctions at MSU in exchange for truthful accounts of his recruitment by the Rebels.

Lewis, a four-star prospect ranked as the nation’s top inside linebacker coming out of Brookhaven during the 2015 recruiting cycle, originally committed to Ole Miss before signing with MSU.

Ole Miss admitted in its response some of Lewis’ claims are “credibly and persuasively supported in the record,” but the school contested that there were far more inconsistencies.

The NCAA alleges in four separate charges that former Ole Miss staffers arranged for boosters to provide Lewis with impermissible benefits ranging from free lodging, meals and merchandise to cash payments of up to $15,600. The school is contesting all of them “because (Student-Athlete 39’s) story is either contradicted by objective evidence, is denied by alleged involved parties and/or is not corroborated by (Student-Athlete 39’s) family and friends. In large part, these allegations depend on (Student-Athlete 39’s) testimony, which is internally inconsistent in places and incomplete or lacking in details in others.”

Ole Miss didn’t deny that former assistant athletic director for high school and junior college relations Barney Farrar facilitated impermissible contact between two boosters and Lewis, but the school argued that allegations of multiple payments made to Lewis from April 2014 to January 2015 totaling anywhere from $3,000 to $5,600 and another $10,000 payment made in February 2015 can’t be proven because the only evidence is Lewis’ testimony, which the school referred to in the response as “neither corroborated nor consistent.”

Specifically, Ole Miss claimed Lewis changed details in his story when asked about the alleged payments in separate interviews with the NCAA’s enforcement staff, giving conflicting accounts of the amount he was allegedly paid, how many payments he received and when he received payment.

The biggest inconsistency, Ole Miss claimed, came when Lewis altered the timeline after claiming he didn’t have any contact with the booster after receiving the alleged $10,000 payment on Feb. 3, 2015. After the enforcement staff showed Lewis a text message sent from the booster to Farrar timestamped 4 p.m. on the day in question, Lewis said he received the same text after meeting the booster right after school to get the alleged payment before claiming in a third interview that he received the alleged payment around 5 or 6 p.m. that day.

“These two accounts — the first involving a payment immediately after school and the second involving a payment several hours later and after [Booster 14] sent Farrar the text — cannot be reconciled,” Ole Miss said in its response. “More importantly, neither can be true considering objective evidence.”

A Level-III violation against Freeze alleges that Ole Miss’ coach had impermissible contact with Lewis at his high school on Dec. 3, 2013 that included a recruiting conversation with Lewis that lasted up to 10 minutes, another charge Ole Miss contested after the school claimed Lewis’ recollection of exactly how long the alleged interaction lasted wavered. Ole Miss claimed the allegation is refuted by Lewis’ high school coach, who said the encounter was “short and unplanned” after he called Lewis into his office for something unrelated with Freeze also getting to the coach’s office by the time Lewis arrived.

The NCAA has 60 days from the time Ole Miss filed its response to build its case summary before Ole Miss schedules a hearing with the Committee on Infractions. As part of its response, the school posed a question for the NCAA and its enforcement staff in light of the various inconsistencies in the allegations that involve Lewis and the ones that don’t.

“Does an allegation of serious misconduct require corroboration beyond a general and inconsistent account of wrongdoing from a biased witness?” part of Ole Miss’ response asked.