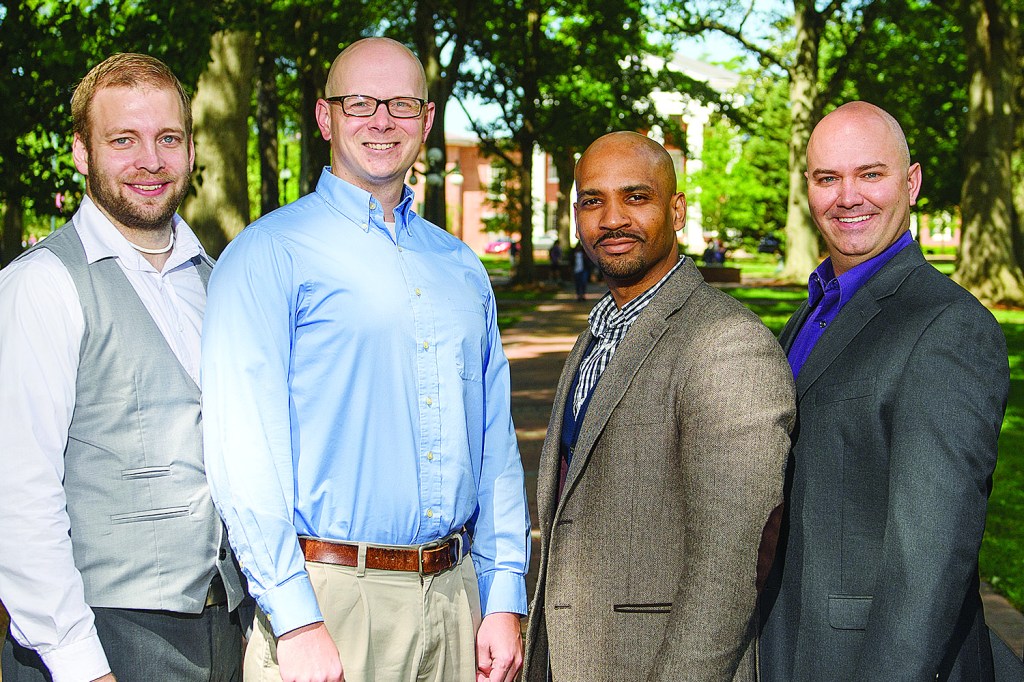 Four University of Mississippi faculty members have been honored as inaugural recipients of a New Scholar Award in the university’s College of Liberal Arts.

“The College of Liberal Arts continues to recruit some of the very best young faculty in the nation,” said Charles L. Hussey, associate dean for research and graduate education and professor of chemistry. “These faculty members represent the ‘best of the best’ in the college and will no doubt prove to be academic leaders in their discipline.”

The New Scholar Award will be presented annually to untenured, tenure-track faculty members in the College of Liberal Arts who are within six years of their initial tenure-track academic appointment and who have demonstrated exemplary performance in research, scholarship and/or creative achievement. Depending on the quality of the pool of nominees, up to four awards will be available, with one each chosen from the areas of Natural Sciences and Mathematics, Social Sciences, Humanities, and Fine and Performing Arts.

Individuals may receive the award only once, but recipients will retain their eligibility for the College of Liberal Arts Award for Research, Scholarship and Creative Achievement, which is normally awarded to post-tenure, senior faculty.

“New scholars must be nominated by the department chair and/or tenured professorial rank colleagues in cooperation with the chair,” Hussey said. “Nominations will remain active for two years. A faculty committee chosen by the dean of the College of Liberal Arts or his designee will select the award recipients.”

Wilson said that for the college to acknowledge his work as an actor, director and choreographer makes him feel at home and proves that the administration is committed to a forward-thinking mission that addresses the plurality of the modern university and the needs of the modern world.

“My only concern in accepting this position was whether I would be able to stay connected to the world of theater practice and keep my professional career viable while based in Oxford,” he said. “My first two years here have worked out better than I had even hoped, and this award is a recognition of what I have been able to accomplish through the support of the university.”

One of Wilson’s specialties focuses on Italian Renaissance masked comedy called “Commedia dell’Arte.” This was the style of the Ole Miss Theatre production of “The Tooth-Puller” and is the subject of his scholarly book chapters and published plays.

“Each year, I travel to conferences and other universities to perform my ‘The Great One-Man Commedia Epic’ and to lecture on the history and theory of Commedia dell’Arte,’” he said.

“Currently, I am in northern Italy teaching Commedia at a workshop in Siena, which includes several of our theatre arts majors, and traveling to historic theaters and museums for further research. My stipend is proving useful and well-timed in helping to subsidize this research trip.”

Hendrickson said he was surprised and humbled by the award.

“Maintaining an active and growing research agenda requires a lot of time and effort,” he said. “To be recognized as a recipient of this award when I know that there are countless others on the faculty working hard toward similar goals is an honor.”

Hendrickson’s research is predominantly focused on monetary theory, history and policy. He studies the effects of monetary policy on the economy, both in the present and during important historical events.

“My most recent work, for example, shows that the inflation that the British experienced during the Napoleonic Wars was due, in part, to the monetization of government debt by the Bank of England,” he said. “Other recent work examines how inflation affects the production decisions of firms and whether lowinterest rates can potentially cause boom-bust cycles in investment.”

To be recognized by the university is very rewarding, Harriell said.

“I believe in this university, the English Department and our MFA program,” he said. “Additionally, I work hard to sustain the level of excellence that has been set. For the university to acknowledge this means that my carrying of the torch is not being overlooked.”

“My third collection is a collection that investigates my own past, as well as my adjustment to Mississippi and the South,” Harriell said.

Delcamp said he was so focused on his field’s research that he really hadn’t considered anyone outside of it taking notice of progress being made.

“To be acknowledged by people outside my own small research world was very fulfilling,” he said. “To be given an award like this certainly has instilled a sense of pride in the work my group has done. It was great to see people outside my field taking note of how hard we have been working.”

Delcamp’s research focuses on dye-sensitized solar cells. These solar cell materials are made from very robust, cost-effective, non-hazardous materials and can be mass-produced at a fraction of the cost of solar cells commonly seen on rooftops.

“My group focuses on one specific component of these solar cells that is known to be the performance limiting material,” Delcamp said. “We are using synthetic organic chemistry to offer new materials which can be competitive in terms of performance to traditional solar cells while maintaining the tremendous cost advantage.

“So far, my team owns a number of records in this field, and we look forward to breaking them soon.”