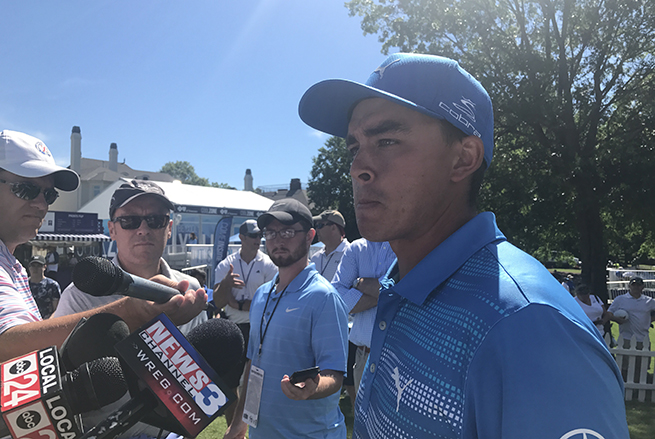 MEMPHIS — The day before a PGA event is when the major players will begin to arrive to a course and start getting some practice rounds in ahead of Thursday’s first round. On Wednesday, the St. Jude Classic held the Inner Workings Pro-Am with nearly the entire field playing with a group of four amateurs.

It was a new format this year as each group of amateurs were paired with two professionals, one for the front nine and one for the back nine. Some of this week’s heavy hitters went out early including 5-time major champion and last year runner-up Phil Mickelson as well as Rickie Fowler.

It is the first time back to TPC Southwind for Fowler in four years, last playing in 2014 and finishing tied for 13th, shooting 5-under.

Fowler got a little practice in Tuesday afternoon and played the back nine with his pro-am group Wednesday morning.

“The course here is always great,” Fowler said. “It’s a pretty wet right now from tee to green. The greens are a little soft and a little on the slower side so, hopefully we can keep the rain away and the course will dry out for the week.”

“I love the Open, but this is a special moment for us,” Mickelson said. “My daughter is speaking. She’s giving the speech at graduation. So, it’s just one of those things where you need to be there. It wasn’t a hard decision.”

Taking the U.S. Open out of his schedule this year, the thought of skipping Memphis this year never came into Mickelson’s thoughts. Last year he shot a 67 on the final round to finish 10-under, three shots behind winner Daniel Berger. Three of the last four years has seen Mickelson finish no worse than tied for third.

“I didn’t think about (skipping), because I’ve really come to enjoy playing here over the last four, five years,” Mickelson said. “It’s become one of my favorite golf courses. I think it’s one of the most underrated courses we play.”

Ole Miss’ Braden Thornberry ‘getting the vibe’ for first…