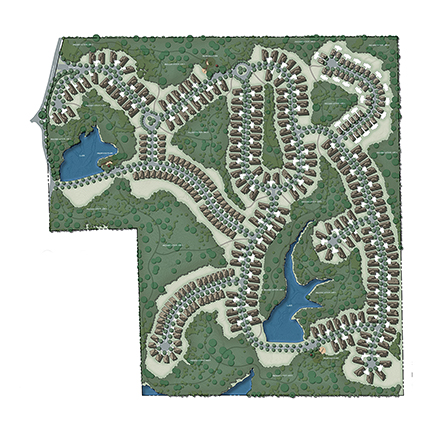 This graphic provided by Precision Engineering depicts the conceptual drawing of the Old Oaks of Oxford development located on County Road 217 near Campground Road and Highway 6. The Lafayette County Board of Supervisors approved phase nine of the project on Monday.

Old Oaks of Oxford, a 300-plus housing development off Campground Road, is at a stand still after the Lafayette County Board of Supervisors refused to accept the recommendation from the county planning commission to allow the project to go forward.

The same traffic concerns the planning commission members raised were also at the forefront in the minds of the supervisors and in particular Board President Jeff Busby, who said during Monday evening’s meeting that his phone rings constantly from his constituents in the area about speeding vehicles and their safety.

Busby and others on the board are also concerned with the entrance to the development, which sits at the top of a hill on County Road 217.

Paul Koshenina with Precision Engineering said a traffic study the developer had conducted indicated the need to include turn lanes, as well as deceleration and acceleration lanes for the entrance to the development. He admits that speeding on the roadway is an issue, but “traffic studies don’t address speeding. That’s a legal issue.”

He said stop signs are one of the more effective ways to address the issue of speeding and the developer is also willing to install flashing lights.

“We want it to be safe also,” Koshenina said.

Busby, however, said the problem already exists with speeding and the number of vehicles on the two-lane road.

“Residents have had concerns well before this development was proposed,” Busby said. “They live with cars tumbling into homes, trailers and running off into their property. I fail to see how this is not a safety issue by allowing 300 more homes in the area.”

Koshenina believes his client has satisfied all of the requirements and then some. He said the roads will be curb and gutter and will be privately maintained. The development is also well within the four units per acre requirement with 2.2 units per acre. Punkin Water Association has confirmed they can supply up to 126 units in the first phase of the development and the city of Oxford has already committed to providing sewer.

Supervisor Kevin Frye said along with the traffic issue, he is also concerned with adequate water being provided to the project since other housing developments already exist in the area, such as Tuscan Hills, Pebble Creek, Highland and The Lakes.

“I’m not completely comfortable with that,” Frye said, adding that he would like to see the city of Oxford annex the development.

But most appealing to the board is the fact the development will include workforce affordable housing, something officials have said is desperately needed in Lafayette County.

The board agreed the development is an excellent project, but just in a bad location.