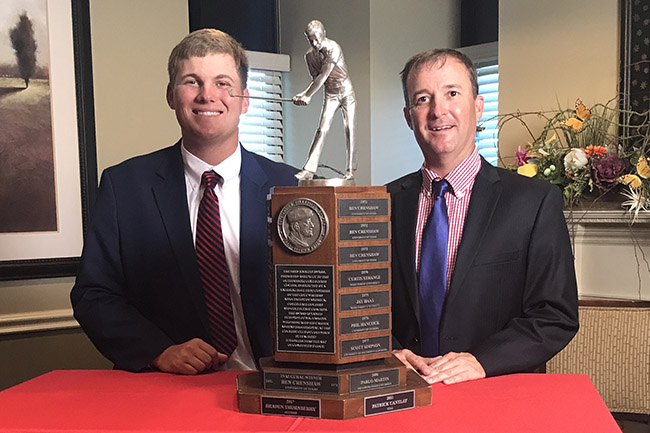 The trophy case is filling up quickly for Braden Thornberry. Nine days after winning the NCAA Men’s Individual National Championship, Thornberry had another honor bestowed upon him. The Ole Miss sophomore was named the 2017 Fred Haskins Award winner, naming him the most outstanding men’s collegiate golfer.

The award was presented in the clubhouse at TPC Southwind, the site of this week’s FedEx St. Jude Classic where Thornberry is making his first career PGA Tour start.

The Fred Haskins Award is presented annually by the Haskins Commission to honor the most outstanding collegiate golfer in the United States. The award is named in memory of Fred Haskins, former golf teaching professional at the Country Club of Columbus. Votes are tabulated by the Haskins Commission from select writers, golf coaches and collegiate golfers.

Thornberry led the nation in stroke average at 69.57 this season and posted five wins including the national title. The Olive Branch native is tied with Dave Peege for the Ole Miss record with seven career wins in just two seasons in Oxford.

It was a historic vote as Thornberry received the highest percentage of golfer votes ever.

“It’s obviously really cool,” Thornberry said. “Being voted by your peers, that’s the greatest accomplishment you can have. …It validates all the hard work I put in.”

After claiming three of his five wins during the fall, Thornberry put the Haskins Award on his radar as a possibility then winning the Jones Cup during the spring really put the idea of earning the trophy as a tangible goal.

Thornberry will get the opportunity to play in another PGA event next month, receiving an invitation to play in the Greenbrier Classic July 6-9 in West Virginia.

“To be named the most outstanding player in college golf is an incredible honor,” said Ole Miss head coach Chris Malloy. “Braden has been so consistent and to cap the year off with an NCAA Championship makes this season one that we will never forget.”