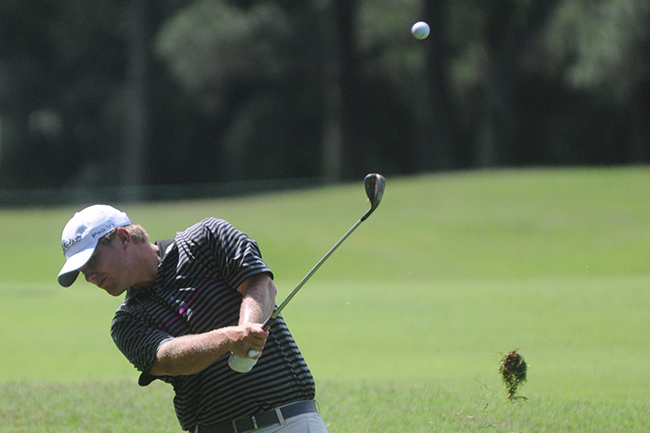 Ole Miss' Braden Thornberry hits an approach shot on Hole No. 2 at TPC Southwind during his practice round on Tuesday in Memphis. (Jake Thompson)

MEMPHIS — The past two weeks have been a life-changer for Braden Thornberry, whether he wants to admit it or not. The Ole Miss sophomore clinched the men’s golf program’s first ever NCAA national championship with his individual title at the Men’s NCAA Golf Championship held in Illinois over Memorial Day weekend. This week he is playing in his first PGA Tour start as an amateur at the FedEx St. Jude Classic being held at TPC Southwind thanks to a sponsor’s exemption. He tees off Thursday at 9 a.m.

The television coverage on the Golf Channel was solely on him during the final round of the individual tournament and the nation knew who Braden Thornberry was. During his practice round on Tuesday at Southwind, Thornberry was followed by a one-man camera crew during his back-nine for a video package Ole Miss was going to send out to media outlets touting the Rebel’s big week. Nothing fazed him.

“Last week the Golf Channel was there with cameras and ropes running all around so, that was a perfect practice round for this,” Thornberry said. “That kind of stuff doesn’t really bother me.”

The week did not begin for Thornberry on Tuesday, who tried his hand at the U.S. Open sectional qualifier on Monday where he played 36 holes (18 at Germantown Country Club, 18 at Ridgeway Country Club). He failed to qualify for his first major tournament, shooting 2-under. With the amateur status, he did not participate in today’s Inner Workings Pro-Am and used it to relax and get recharge for what he hopes is a long four days.

Tuesday’s practice round was used for Thornberry to get an idea of how the course is set up for a PGA event. It was not a completely foreign course to begin with as the Olive Branch native has played at Southwind on many occasions but this week is foreign to him and with the rain that hit the Memphis over the past couple weeks, including the first half of this week, the practice was valuable.

“It’s pretty much what I was expecting,” Thornberry said. “The was really wet (Tuesday), but with the forecast, it’s supposed to get really firm. I’m not putting a lot of stock in what clubs I’m hitting off the tee. Just kind of getting loosened up and getting the vibe of the tournament.

Walking the 18 holes with him was Ole Miss men’s golf head coach Chris Malloy as well as his father, Les, who made the 20-minute drive up from his home in Olive Branch to watch. Malloy will not be walking the course beginning Thursday, as Thornberry’s caddie is Kip Henley, who has been around the game of golf for a long time and caddied the likes of three-time major champion Vijay Singh.

“I do think familiarity is going to play a key part in this week, because there’s going to be so many other things that are going to be thrown upon him with it being his first Tour event,” Malloy said. “But, he’s such a level-headed young man. …I think it’s going to be as good an experience that he’s ever had. He’s got Kip Henley who has a great track record on the bag.”

Playing with Thornberry the first nine holes of his practice round was former Ole Miss player Jonathan Randolph. Randolph did qualify for his first U.S. Open after winning a rain-delayed playoff Tuesday morning before coming over to Southwind to get some time on the course.

“When I left (Ole Miss) they had a long stretch where they didn’t make the NCAAs and I never made it to the NCAA finals,” Randolph said. “For him to go and to finish it is huge. It can’t do anything but prove you can be the best player in the country if you come here and play. That speaks wonders to what coach Malloy has done.”