Braden Thornberry shoots 71 in opening round of St. Jude Classic 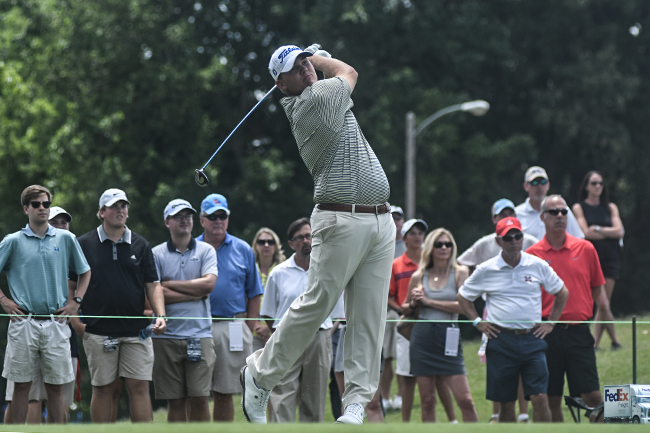 Ole Miss Braden Thornberry plays in the opening round of the FedEx St. Jude Classic at TPC Southwind in Memphis, Tenn. on Thursday, June 8, 2017.

MEMPHIS — All the talk and discussion was over and it was time for Braden Thornberry to put club to ball as the Ole Miss sophomore played in his first PGA Tour event, beginning his opening round Thursday morning.

It was an up-and-down round for the Olive Branch native, who shot an opening 71 to finish 1-over in the FedEx St. Jude Classic at TPC Southwind

“If you had told me I came out here and shot a 71, I wouldn’t have been too displeased,” Thornberry said. “But to get off to that start and be up near the lead was a cool feeling. Just kind of lost it off the tee on the back nine a little bit.”

The nerves of staring in his first PGA Tour event were non-existent with Thornberry his entire round, but especially during his first nine holes, which were the back nine of the golf course. He played even-par golf through his first five holes, lipping out a would-be birdie putt on the par-3 14th hole. After a monster drive of more than 270 yards on the par-4 15th, Thornberry buried his first-ever birdie putt in a PGA event to get to red figures. He followed it up with a second consecutive birdie on 16 to get to 2-under, one back of the leaders at the time.

Stewart Cink, Matt Every, Scott Brown and Sebastian Munoz all tied for the lead at 6-under heading into Friday’s second round.

The final nine holes proved to be a tougher test for Thornberry, who shot 3-over with bogies on No. 1, 5 and his closing hole of No. 9. The much-talked-about short game came into effect in the middle stages of his back nine where with pars on holes 6-8, including two sand saves on No. 6 and 7, he kept the round from getting away from him.

“You kind of have to have a short game like that when you’re hitting the ball off the tee on that side,” Thornberry said. “I was kind of scrambling all day, but those are the kind of stretches that keep you in the tournament. I’m happy with the way I handled it.”

Thornberry, the only local player in the field this week, had his family and friends following him throughout the day. The gallery started with roughly 100 people on No. 10, his opening hole, but slowly grew as the round progressed. Ole Miss men’s golf coach Chris Malloy was with Thornberry every shot of the day, staying close by the ropes.

“It’s kind of cool to have all those people supporting you,” Thornberry said. “People that work with my mom and from my high school and stuff like that.”

The moment of Thursday was not lost on Thornberry, who is playing a field that includes Phil Mickelson, Rickie Fowler and Adam Scott among others. While walking the course and waiting to hit his next shot, Thornberry made sure to take in the atmosphere.

“I try to do my own thing but also take a sneak at Phil, who I saw was on No. 2,” Thornberry said. “I wanted to watch him hit a shot or two, but I just try to stay in my own lane and do that.”

Thornberry is the final group to go off in Friday’s second round with a tee time of 2 p.m.