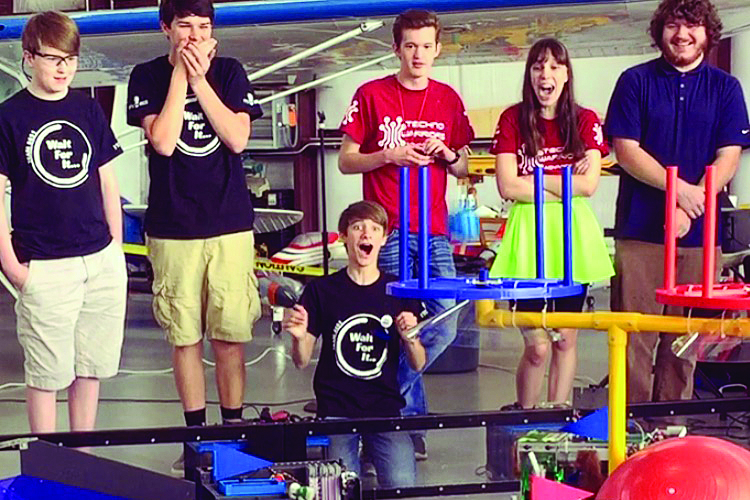 Wait For It team members, from left, Logan Hariel, Jordan Hariel and Noah Gregory watch their robot Kip launch a ball or “particle” into their goal at a scrimmage event in Bolton. (Photo/Kendra Ablaza, Mississippi Today)

Kip identifies lights and colors. He can lift objects larger than himself off the ground, and he can shoot balls into a basket with accuracy.

At the start of the school year, seven home-schooled students from Pearl and Brandon began putting together materials such as aluminum, 3-D printed recycle plastic parts and steel. Three months later, out came Kip, who they named after a character in the movie Napoleon Dynamite.

“This one part where Napoleon’s brother Kip says, ‘Things are getting pretty serious,’ we said that about our robot when we were almost finished building it,” said student Lilli Stewart, 16. “We were looking for a new robot name and decided to name him that.”

Things got very serious for the young robotics group, who range in age from 8th graders to 11th graders and call themselves Wait For It. They entered Kip in competitions against robots built by other student teams in which each robot completes a set amount of tasks under a time limit.

As they moved through in-state and regional competitions, the students sharpened Kip’s skills — and their own — to the point where they were part of a group that won a world championship in April.

Wait For It is the only Mississippi team to earn one of the top spots in the FIRST Championship, which included approximately 1,500 students on their level from 33 countries and was organized by nonprofit group For Inspiration and Recognition of Science and Technology.

FIRST was founded in 1989 and strives to spark K-12 students’ interest in science, technology, engineering and math, also known as STEM fields, via its international robotics programs.

Its teams, which can be formed through a school, an organization such as 4-H or individually, register with FIRST each year and pay dues that give them access to a robot-building kit and FIRST competitions, among other things. Wait For It competes in the FIRST Tech Challenge program.

Teams have six weeks to complete a robot before competitions kick off. They can also make tweaks to their robot as they go.

Paul Stewart, one of Wait For It’s coaches, helps the students with technical aspects of robot building. He said students can gain their first engineering experience through the activity.

“The problem-solving, designing solutions to complete a task, those are skills that can directly go into engineering and science in the professional world,” said Stewart, who is a machinist at Leonard Metal Fabricators in Pearl and Lilli Stewart’s father.

Hundreds of hours go into this craft. Team members are in charge of different tasks, such as computer-aided design and drafting to draw the robot; budgeting and accounting; ordering parts; and putting together an engineering notebook, which documents the project like a technical diary.

In the end, students who participate in FIRST can access scholarships from the nonprofit’s supporters such as colleges, universities and corporations. Competing also gives students a chance to network, because more than 75 percent of FIRST alumni were in a STEM field as a student or professional as of 2015.

Most of the members in Wait For It have been building robots in some form since their elementary school years.

“We used the Lego Mindstorms kit,” Wait For It team member Matthew Blacksher, 16, said. “You build a robot out of Legos to complete missions. That’s what we started with, which gave us a lot of preparation for this.”

FIRST offers multiple programs that vary by difficulty. Students most often begin building robots through FIRST Lego League, which involves building simpler robots with Legos. They may move on to higher levels of building that involve more complicated challenges and stronger materials such as wood and aluminum.

“We all really enjoyed Legos and thought, ‘Hey, this would be cool. We could build robots with Legos,’” said team member Lauren Blacksher, 13, who is Matthew Blacksher’s sister. “That’s kind of where it started. We got to spend a lot of time with friends, and it also helps build a lot of character and responsibility. It got to where this is what we wanted to do, and this is what we thought about, and this is how we spend all of our time.”

As their skills progressed through the years, the game became more complex. The robots got bigger and the playing field moved from a table to a 12-by-12 foot field on the ground.

The transition wasn’t always easy. Team member Jordan Hariel said he was hesitant to compete in the FIRST Tech Challenge level, because he enjoyed FIRST Lego League so much.

Eventually, the challenges that came with more complicated robot-building grew on him.

“When we started doing it, I was like, ‘I really like this, actually,’ ” said Hariel, 17. “Doing programming, it’s never something that I’ve really tried my hand at before. The way that we program is very similar to how it will be applied in the real world. I found that that’s something I really love to do.”

Some Wait For It members have been building robots together for as long as seven years. The farthest the team had gone before this was to the South Super Regionals, the level just before the championship.

The average cost per student, which includes team registration, a robot kit of parts, event registration and travel, is about $2,250 per season.

This past year, Wait For It’s journey to the top cost the team around $10,000, which includes building materials, entrance fees, club dues, outreach and fundraising events. This amount does not include travel and lodging costs, which are usually paid out of pocket.

Teams are also encouraged to raise money for more robot customization, related parts and team marketing items such as T-shirts. They can recruit local businesses as team sponsors, or explore other fundraising avenues like grants.

Wait For It’s members and their families are now raising money to attend the FIRST Festival of Champions, which takes place July 28-29 in New Hampshire. The team’s coaches estimate that trip alone will cost about $17,000.

In Wait For It’s case, the time and money spent in robotics is worth it. Aside from learning how to build robots, students understand they are learning valuable life skills along the way.

“You’re given responsibilities on the team,” Lilli Stewart said. “They teach you about gracious professionalism, which is a huge part of FIRST … having good sportsmanship on and off the playing field. That really helps you outside of robotics competitions.”

During local competitions, students are often assigned to compete in groups with other teams’ members during matches. Students are also encouraged to help other teams repair their robots if they break down.

FIRST also offers its students exposure to different backgrounds and cultures, both across the U.S. and around the world.

“It was really interesting going around and seeing all the different design concepts,” Matthew Blacksher said. “There were obviously some times where you would see similar designs, but most of the designs were completely unique. It’s really interesting seeing the other teams’ idea of how to solve these problems that FIRST is giving us.”

Personal development is a key component of the program. Matthew Blacksher said his team often gives presentations to judges about their work. Over time, he and his teammates got used to public speaking.

Meanwhile, Lauren Blacksher said she has discovered she is really good with power tools. Robotics tournaments also bring out her competitive spirit.

“I’m a lot more nervous than I thought I would be,” Lauren Blacksher said. “From judging the robot to hoping your robot actually works. I think it’s like a competitive nervousness.”

Students have said everything they learn through FIRST can help them achieve their career goals in some way.

Lilli Stewart said she wants to serve in the Air Force or become a rocket engineer for NASA, and the skills she is learning through FIRST are laying the foundation for that.

“I naturally like learning about space and science,” she said. “With robotics, that kind of led me to building rockets. … With the Air Force, I’ve always wanted to get a pilot’s license.”

Lauren Blacksher said she is interested in becoming a nurse, and the public speaking skills she’s developing through FIRST could aid her work diagnosing future patients, she said.

“It opens up a lot of options and availabilities,” Lauren said. “Being able to put that we made it to World, and even that we won World, colleges really look for that. They want you to come, because (they think) this is somebody who knows what they’re doing.”