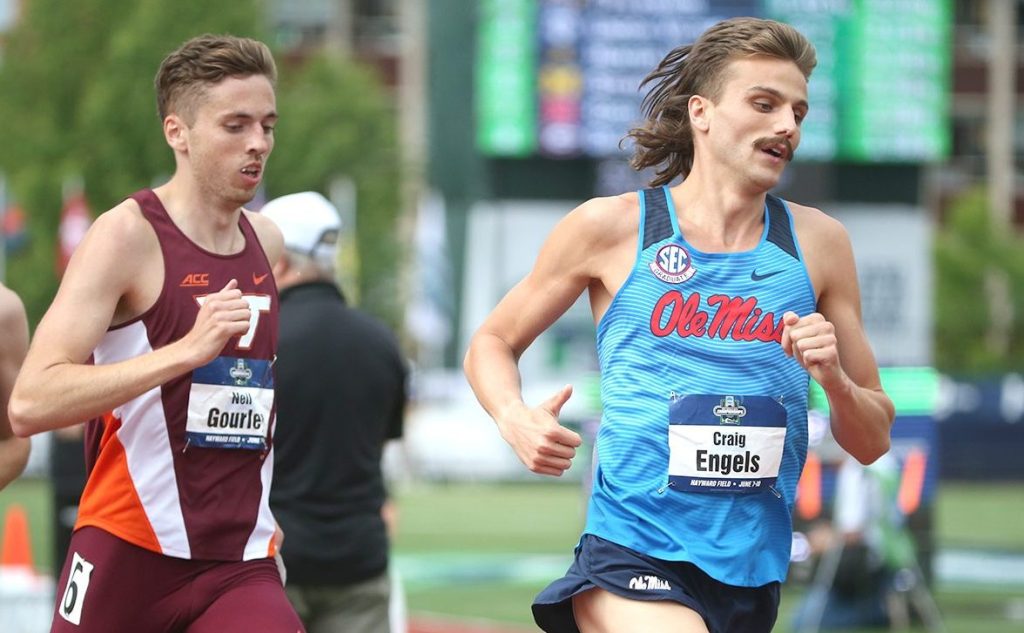 Craig Engels is attracting a lot of attention at the NCAA outdoor track & field championships this week, and it has little to do with the reason he’s actually there.

Engels, Ole Miss’ senior distance runner, has a unique look. He sports a thick mustache and hair that’s neatly trimmed on top and out front but includes a flowing mullet that touches the top of his knit. Once television cameras caught a glimpse of Engels during the first day of the men’s competition Wednesday at Oregon’s Hayward Field, his appearance went viral.

From movie characters to out-of-work adult film actors, Engels’ hairy combination drew no shortage of comparisons from the internet. Even ESPN sports business reporter Darren Rovell, who often points out odd or interesting things to his nearly 1.8 million Twitter followers, tweeted multiple photos of Engels on Wednesday, calling Engels “the star” of the championships.

It’s unclear why Engels decided to grow the mustache and mullet, though some of his coaches aren’t surprised it’s him who’s trying to pull it off.

But Engels can run a little bit, too.

Engels, who transferred from North Carolina State, finished seventh in the 1,500 meters at the NCAA outdoors last season and is back this year after recently winning his second straight Southeastern Conference championship in the event. He won the 1,500 heat Wednesday with a time of 3 minutes, 40.07 seconds and will be the top seed in a 12-man final field when he runs for a national championship tonight at 7:42 CT. The event will be televised on ESPN.

Here’s a sample of the reaction to Engels’ look:

The mustache & mullet of Craig Engels, who will be in the 1,500 meter final on Friday, is the star of Track & Field Championships pic.twitter.com/J7NAAjXbD9

This Ole Miss track and field athlete has the most glorious mullet-mustache combo https://t.co/7S5XKvw9jt pic.twitter.com/Pp50JBqTHr

Craig Engels and his 'stache will lead the pack to the #ncaaTF 1500 finals. pic.twitter.com/vRrtoAJArU

@OleMissRebels track runner Craig Engels has a sweet mullet and stache to go with it pic.twitter.com/iZtQUZi3r4

The most American track athlete ever. Merica. pic.twitter.com/X9wRRpAYWS

Separated at birth? Re: The mustache / mullet of Craig Engels, is the star of Track & Field Championships pic.twitter.com/jk4boFYhjp