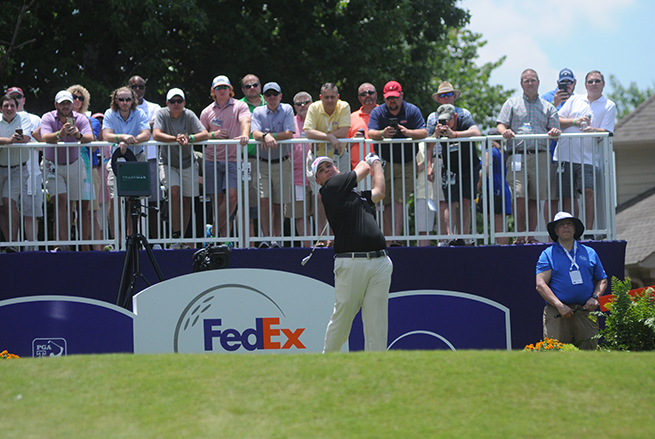 Braden Thornberry tees off on Hole 18 at TPC Southwind during Saturday's third round of the FedEx St. Jude Classic (Jake Thompson)

MEMPHIS — Braden Thornberry has had success at TPC Southwind in the past, going as low as 61. If he could find some of that magic Sunday, another trophy might find its way into his hands.

With a large gallery of family, friends and teammates yelling out “Hotty Toddy” and calling the Ole Miss sophomore by his nickname, Ted, Thornberry gave them a show Saturday with a third-round 67, finishing 3-under and with an outside chance at making some noise in today’s final round of the FedEx St. Jude Classic.

The lead is 9-under with a three-way tie between Rafa Cabrera Bello, Stewart Cink and Ben Crane.

“It’s no pressure for me being an amateur,” Thornberry said. “Just kind of coming out and doing my best. Having fun and all the Rebel fans out there, that’s awesome. A hometown feel. … I’ve heard my fair share of Hotty Toddys. Probably close to a thousand of them.”

Thornberry made the weekend cut of his first PGA Tour start by shooting a 1-under 69 in Friday’s second round, getting inside the cut line of 1-over by two strokes.

For the second time in three days, the NCAA champion started his round on the back nine, where he had shot 5-under over the course of the first two days. Thornberry had success once more on the outward nine, shooting 1-under to get him into red figures for the first time all week.

His struggle this week has been the opening nine holes. Thornberry was a combined 5-over in the first two rounds but, on what is commonly known as Moving Day, he shot 2-under with a string of birdies on holes 2-4. Beginning on hole 14, Thornberry also had a streak of nine straight one-putts.

“I struggled on the front nine the first two days, but I’ve played good on that side so many times, so I wasn’t too concerned,” Thornberry said. “I missed a couple greens and had a couple one-putts then got on a hot streak with a couple birdies. I started rolling it pretty well.”

Stress is something that has not come across when watching Thornberry’s demeanor and body language on the golf course the first three days. With a strong third-round performance setting him up for a potential run in the final round, Thornberry is playing it cool.

“Make a bunch of birdies and just move up the leaderboard,” Thornberry said. “That’s really all I can do at this point. Nothing to lose, so just go out there and kind of freewheel it a little bit.”

After making the weekend right on the cutline of 1-over, Jonathan Randolph struggled during Saturday’s third round. The former Ole Miss golfer shot a 9-over 79 to finish 10-over through three days.

The back nine is where Randolph began and posted 3-over before shooting 6-over on the front nine, including two double bogies on holes 6 and 7. He had one birdie on the round coming on the par-5 16th but also tallied six bogies on his round.

Randolph withdrew from the tournament after the third round for an official listing of MDF (made cut did not finish). He will fly to Erin, Wisconsin Sunday evening to begin prep for next week’s U.S. Open.

Watch Thornberry’s full interview after Saturday’s third round below