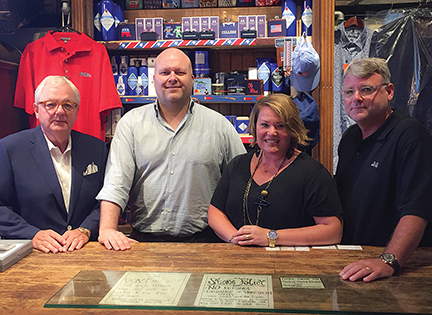 EDITOR’s NOTE: Hinton & Hinton is among the 2017 Best of Oxford winners and the public is invited to The Lyric Thursday for Oxford Magazine’s inaugural Best of Oxford celebration. Call 662-234-4331 for tickets.

About 26 years ago, the father-son team of Forrest and Steve Hinton saw an opportunity in Oxford and decided to take a chance that has paid off tremendously.

After working primarily on the wholesale distribution side of the clothing industry, the two decided to make the switch to retail in 1991, and Hinton & Hinton has remained an institution on the Square ever since.

As Oxford has continued to grow and evolve at unprecedented levels, the store has likewise experienced its fair share of change over the years.

In addition to store expansions and the addition of women’s products to their selection, the store is currently looking to expand its commitment to exclusive Hinton & Hinton brand products, which will be supported by the September launch of an online store.

Steve Hinton acknowledged that without proactively meeting the challenges of an evolving industry and town, the store would not be in the position it is today.

“You have to change with everything, or you won’t be here for 25 years,” Steve said.

That said, it takes more than a willingness to change to keep a business thriving after all these years. It also requires a hands-on commitment to hard work and dedication.

“You have to work incessantly harder, continuously,” Steve said. “We’ve been doing this every day for 25 years together, and if you’re absent, it does not work. You’ve got to be here, and you’ve got to be productive.”

According to Steve, seeing everyone’s hard work eventually pay off remains one of the most rewarding aspects of the business.

Additionally, Forrest emphasized the importance of the local community in providing a solid base for the business since opening their doors for the first time.

“We’re very happy that we have had such a support from the city and the support of the locals,” Forrest said. “We were given the opportunity to put forth the concept and it was received extremely well in the community. I’m very glad that it has continued to grow.”

Now that over 25 years have passed, both Forrest and Steve noted that their local support is complemented by a large network of alumni that return to their old stomping grounds and continue to support the store long after they have finished their time at school. Better yet, the two now realize that the store has been open long enough to span generations, beginning to link child, parent, and sometimes even grandparent.

“We’re at that point now where we’ve gotten to a third generation,” Forrest said.

As for the Hintons themselves, both father and son said that the business has added another component to their family relationship.

“There has to be an understanding that, from a business standpoint, it’s ‘Forrest and Steve,’ and then after 5:30, it’s father and son,” Forrest said. “I’ve been able to lean on my family pretty hard and believe in them, and they’ve come through.”

Steve views this dual relationship as a force that strengthens their relationship in a way that otherwise might not have happened, as the two have had to balance a family relationship with a sometimes hectic business environment that makes them combat adversity with positivity.

“It’s a way to have an even more in-depth relationship with your family in a very positive way,” Steve said. “For me being the son in the father’s footsteps, I’m just thankful to have that relationship.”

In addition to the family relationship at the center of Hinton & Hinton, Steve also noted that the support staff behind the two has been not only like another family, but also an irreplaceable component in the store’s success.

“We’ve been very fortunate to surround ourselves with incredibly talented and trustworthy people,” Steve said. “We have a staff who gives lots of help and back-up. You can’t do it all by yourself, and I would certainly never even try to say that we did. You’ve got to have the right people, and fortunately we do.”

“They’re family to me,” said Turner, who began working with the store in high school. “Steve is a brother and Forrest is another dad to me. Happiness I think is the biggest part of your life, and being able to work with family is awesome. If you’re able to pay your bills and you’re happy while you’re doing it, that’s a good combination.”

Shoemake, who was hired as a store manager upon finishing his time at Ole Miss when the staff consisted of somewhere between four to six people, echoed Turner’s sentiments.

“7,500 square feet later and 26 to 30 people in the organization later, I’m still here, and if I didn’t enjoy it, I wouldn’t be here,” Shoemake said. “I really love everybody I work with. They’re like family.”

Steve said that he could not stress enough the importance of the staff to the store’s success.