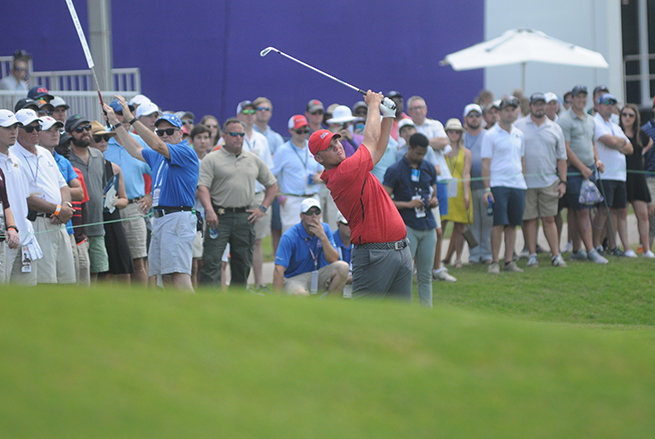 Braden Thornberry hits his approach shot in the 18th fairway during his final round at the FedEx St. Jude Classic at TPC Southwind in Memphis on Sunday (Jake Thompson)

MEMPHIS — When he walked off the course after Saturday’s third round, posting a 3-under 67 to get into contention for Sunday’s final round, Braden Thornberry was calm, cool and collected.

“Just going to freewheel it a little bit,” Thornberry said of his final round plans on Saturday afternoon.

The wheel was indeed free as the Ole Miss sophomore posted a final round 5-under 65 to shoot up the leaderboard to finish at 8-under and tied for fourth place with four others. It is the first time an amateur has placed inside the Top-10 at the FedEx St. Jude Classic since 1965 when Deane Beeman placed 10th. It is the second highest finish for an amateur overall. Mason Rudolph finished third in 1958.

Daniel Berger won with a score of 10-under to claim the St. Jude title in back-to-back years.

“I think the (NCAA Championship) a perfect practice round for this week,” Thornberry said. “Having the ropes, and cameras and people cheering you on. It’s kind of a bigger version of that. It’s still the same golf course and same golf.”

Thornberry was in a nine-way tie for first place after finishing his round and was the clubhouse leader with Billy Horschel for over an hour before Charl Schwartzel finished his round at 9-under, knocking Thornberry out of contention.

A wayward tee shot followed by a poor bunker shot on No. 1 nearly put Thornberry in a bad spot to start his round immediately, but a par-saving up and down jumpstarted what became a birdie at No. 2 and a 45-foot eagle putt on the Par-5 No. 3 to get him to 6-under and only three back of the leaders early.

“On one I hit one of the worst shots of the week out of that bunker and had a great up-and-down from about 65 yards,” Thornberry said. “That kind of jump-started my round a little bit and then birdied 2 and eagled 3. So, kind of right there I knew I was in contention.”

As Thornberry shot up the leaderboard the gallery following him grew, accordingly. Yells of ‘Hotty Toddy’ and ‘Go Ted’ echoed throughout the course of TPC Southwind and by the time he birdied 14 to move to 7-under and only two back of the leaders, people were well aware of who Braden Thornberry was.

“I had a pretty good gallery all week,” Thornberry said. “Obviously when you’re in the lead and a hometown guy there’s going to be some extra people out there. It was awesome having their support.”

Thornberry picked up a birdie on the Par-5 16th to move to 8-under and shot even par on the final two holes. The moment was never too big for the NCAA Champion, who claimed he was ‘more nervous’ talking to reporters after his round than he was competing for the trophy in his first PGA Tour start. The even-keel demeanor can be accredited to the help of Ole Miss’ sports psychologist Dr. Josie Nicholson.

“She’s helped me just staying patient and staying in the moment. I really thank her for that stuff,” Thornberry said.

Sunday capped a full seven-day week of golf, starting with Monday’s U.S. Open sectional qualifier followed by practice round on Tuesday and four day of tournament golf. There is no rest for Thornberry, who is leaving Monday morning for the Sunnehanna Amateur in Johnstown, Pennsylvania that begins on Wednesday.