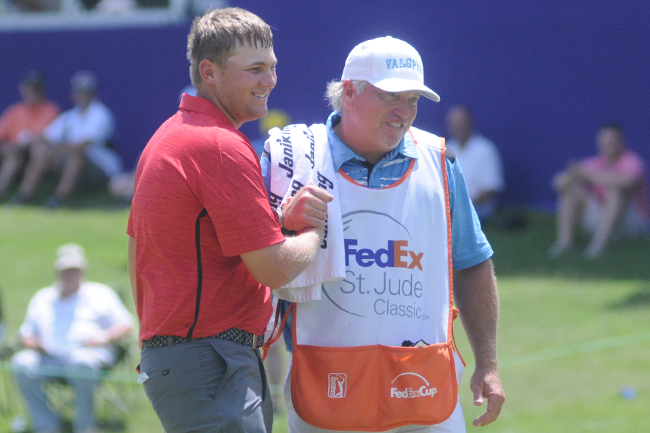 Going in blind on a lot of things in life can be detrimental. For Kip Henley, it proved to be one of the more enjoyable weeks of his professional life.

The long-time caddy on the PGA Tour agreed to be on Braden Thornberry’s bag for last week’s FedEx St. Jude Classic in Memphis through a direct message on Twitter a couple months back. The two had never met and it was an arrangement set up by Ole Miss men’s golf head coach Chris Malloy who knew another coach that knew of Henley and recommended the journeyman looper. Henley agreed to the job, but also told Thornberry’s parents that if a pro offer came along for the week that he would have to take it.

No offer came and Thornberry had his caddy.

The first time Henley ever laid eyes on Thornberry was during the final round of the NCAA Championship on Memorial Day during a party he was hosting for family.

“I hadn’t even watched him make one swing. I had no idea what he looks like,” Henley said after Sunday’s final round. “I told everybody to ‘stop, I have to watch this swing on 18.’ I turn the TV on just in time. He stands up on 18 with a two or three shot lead and you see that homemade, shut-face and arched left wrist and I mean it’s a rocket straight down the middle. I said ‘wow, that’s very impressive.’”

Right then and there Henley felt Thornberry was special, yet the two had still not met or even spoken over the phone. That did not occur until last Monday morning for the U.S. Open sectional qualifier where Henley would begin what became a whirlwind seven days in Memphis for the duo.

Henley was waiting in the parking lot of the Ridgeway Country Club where Thornberry would play his first 18 of 36 holes that day in attempt to qualify for this week’s U.S. Open in Erin, Wisconsin. He was watching every car come in and see if it carried his golfer for the week. Even when Thornberry got out of his car, Henley was not sure it was him until one item gave it away.

“I stand about 50 feet back, wait and see what color the bag was that came out and I see it’s an Ole Miss bag and I walk up and say ‘hey, I’m Kip,” Henley said.

Henley, who spent 10 years on the bag for PGA Tour golfer Brian Gay as well as time with Vijay Singh and Boo Weekley, was with Thornberry for every step of the week and witnessed the Olive Branch native capture the golf community, and the nation’s, attention for four days at TPC Southwind as he climbed all the way to the top of the leaderboard on Sunday.

Sunday’s 65 was not a shock to Henley, who tweeted an hour before their final round tee time, ‘Waited until he wouldn’t see this so I wouldn’t add pressure but there is no way this Thornberry dude loses ground on the field today.’

“He is so golf savvy for a sophomore in college,” Henley said. “He’s a golf nerd. Everything he does is golf. He watches stats. But, he’s so golf savvy on the course. …I told him his game was good enough to win on tour right now and that was after Monday. He was such a treat to caddy for this week.”