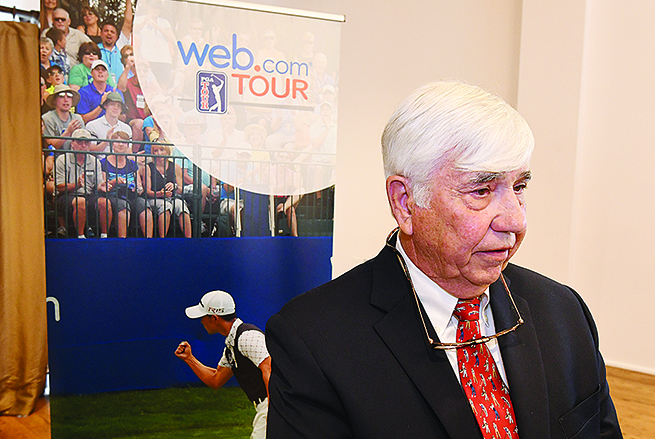 Golf fever has struck the Oxford-Lafayette community over the past few weeks due to the play of Ole Miss’ Braden Thornberry and it will be sticking around a little bit longer. The Country Club of Oxford was named the newest stop on the Web.com Tour, beginning in the 2018 season. The Web.com Tour inside the Country Club of Oxford clubhouse announced the North Mississippi Classic, which will have its inaugural tournament on April 16-22. Tuesday morning. It is a three-year deal that runs through 2020.

“The Web.com tour travels all over this country and countries all around the world and every nook and cranny we go to knows of Oxford,” Stewart Moore, PGA Tour Director of Communications said at the onset of Tuesday’s press conference. “Everyone knows of Oxford and everyone knows The Grove and Ole Miss and Hotty Toddy. Pretty soon everyone is going to know of the Country Club of Oxford and the great golf available in North Mississippi.”

The North Mississippi Classic is the second tournament in three weeks to be added to next season’s schedule on the Web.com Tour. The Savannah Golf Championship in Savannah Georgia will also be added next year. With the addition of a Web.Com Tour stop along with the PGA Tour’s Sanderson Farms Championship in Jackson and the PGA Tour Champion’s Mississippi Gulf Resort Classic in Saucier, Mississippi joins California, Florida, Georgia and North Carolina as the only states to host a PGA Tour-sanctioned event from all three tours.

Next April, 156 players will descend upon The Country Club of Oxford to compete for a purse totaling $550,000 in a four-day tournament consisting of a 36-hole cut to low 65 and ties. The winner will be awarded $95,000.

It is a return to Mississippi for the Web.com Tour. After a successful 10-year run in Gulfport with the Gulf Coast Mississippi Classic from 1990-2000 (the tournament was not held in 1998), which included such winners at Tom Lehman in 1991 and Jim Furyk in 1993. Discussions began in April between the Web.com Tour and the Century Club Charities to have their newest tournament in Oxford.

“The potential connection with Ole Miss and Oxford and the alumni and the hospitality of the community. Just got real excited real fast,” Web.com Tour President Dan Glod said. “We’re experiencing a great bit of momentum right now. We’re looking to continue to add events to our schedule. …When we look at Oxford, we’re going to play a number of events in the Southeastearn part of the United States. When you walk around the Square out there, it’s going to be a great week.”

The Country Club of Oxford is a 2006 Jim Fazio design and sits on some of the most undulating terrain in the region. The 7,000-yard course is one of the home courses of the Ole Miss golf teams. The Web.com Tour was the home of former Rebel Jonathan Randolph last season, who worked his way back to the PGA Tour this season and competing in his first U.S. Open this week.

“We were thrilled to discuss it with (the Web.com Tour staff),” Larry Britt, Managing Owner of the Country Club of Oxford, said. “They’ve come and toured the course on several occasions. I’m sure they will have a few recommendations for changes, but so far they want to leave it like it is. We have a pretty tough course. So, when they speed these greens up even more and they put some pin placements our members are used to, I think these Tour players will appreciate it.”

The tournament team consists of Steve Jent and Jonah Beck who work with the Sanderson Farms Championship. Beck will be the Tournament Director for the North Mississippi Classic.