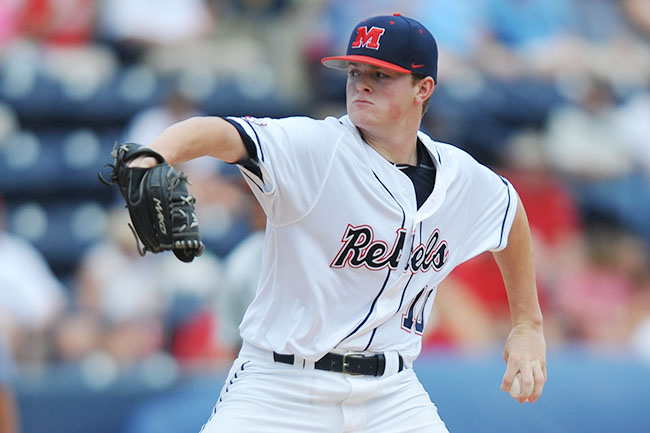 Ole Miss pitcher David Parkinson, pitching against Tulane at an NCAA Regional college baseball tournament game at Oxford-University Stadium in Oxford, Miss., on Saturday, June 4, 2016, has been drafted by the Philadelphia Phillies. Parkinson was taken in the 12th round and is the 353rd overall pick.

Wednesday began with Ole Miss still waiting for a player to be taken in the Major League Baseball Draft. It ended with five of them being selected.

David Parkinson, Tate Blackman, Colby Bortles, Brady Feigl and Kyle Watson were all chosen on the final day of the draft, which consisted of 30 rounds. Parkinson was the first Rebel off the board when the Philadelphia Phillies chose the junior left-hander in the 12th round while Kyle Watson rounded out Ole Miss’ picks, going in the 37th round to the Pittsburgh Pirates.

Blackman was taken in the 13th round by the Chicago White Sox, Bortles went to the Detroit Tigers in the 22nd round, and the Los Angeles Angels of Anaheim tabbed Feigl in the 35th round.

Bortles is the only senior among the group. The rest could choose to return to Ole Miss for another season, though Blackman doesn’t have much leverage as an older junior who will turn 23 in September.

Equipped with a four-pitch arsenal, including a slider as an effective out pitch, Parkinson has been one of Ole Miss’ most consistent weekend arms the past two seasons, going 11-6 during that span. He went 6-3 with a 3.39 earned run average in 14 starts this season with 76 strikeouts in 77 innings.

Blackman hit .302 with 10 doubles, a career-best nine homers and 30 RBIs this season with most of his starts coming in the leadoff spot, but he committed a career-high 12 errors at second base. Some teams leading up to the draft were entertaining the thought of drafting Blackman as a catcher, MLB.com reporter and draft analyst Jim Callis said.

Bortles, a three-year starter at third base, finished his career by leading Ole Miss in home runs (10) and RBIs (42) out of the cleanup spot this season. It’s the first time Bortles, the younger brother of Jacksonville Jaguars quarterback Blake Bortles, has been drafted.

Feigl and Watson are the most likely candidates to return to school next season after going in the draft’s final six rounds.

Feigl, a hard-throwing righty whose fastball can reach the mid-90s, began the season in the weekend rotation but was eventually moved to the bullpen, finishing with a 4.08 ERA with 54 strikeouts and 55 hits allowed in 53 innings. He has two years of eligibility left as a redshirt sophomore.

Watson, a junior, has started just 35 games the last two seasons but has proven to be one of the more athletic players on Ole Miss’ roster, filling in at shortstop and in the outfield. The 6-foot-3, 195-pound Watson hit just .173 this season but was 4 of 5 on stolen base attempts and has successfully swiped 22 of 27 bases in his career.

Teams have until July 7 to sign their draft picks.