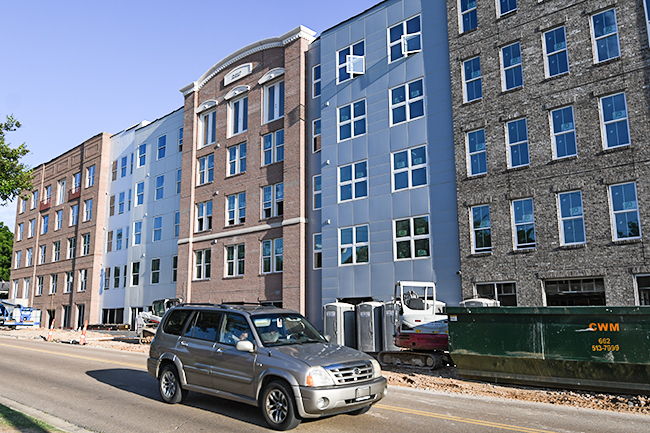 Uncommon Oxford, in Oxford, Miss. on Wednesday, June 14, 2017, is scheduled to open in August.

After a couple of name changes, change in ownership and years of planning, Uncommon Oxford is nearing completion.

Located on East Jackson Avenue, the development, once known as Jackson Row, is now 90 percent leased ahead of its planned August opening.

Located a half-mile from the University of Mississippi campus, the development is now owned by CA Student Living, which is part of Chicago-based developers CA Ventures.

“Uncommon Oxford is one of the more refined apartment communities in Oxford, providing a sophisticated alternative to the party atmosphere at other near-campus communities,” said JJ Smith, president of CA Student Living.

“We like to think of it as a boutique hotel for students — one that combines the comforts of home with lifestyle-oriented amenities that are unparalleled in the market.”

The development has 11 buildings with varying heights with different facades. The total building area equals about 75,650 square feet with a retail/commercial/restaurant space equaling about 10,665 square feet with the remaining being residential space with 224 beds, and an underground parking lot for residents.

The rooms are rented by the bedroom and come fully furnished. The prices range from $725 per person for a four-bedroom/two-bath suite to $1,200 for a two-bedroom/two bath suite. Units are configured in a mix of two-, three- and four-bedroom suites offering two, three or four baths.

The complex has a 24-hour doorman and the ButterflyMX mobile video surveillance and entry system.

Oxford Building Official Randy Barber said no certificates of occupancy have been issued yet but expects that to change over the next few weeks.

“We’ll probably start getting a few in July to start moving furniture in,” he said.

CA Student Living is currently negotiating a lease with a fitness-related tenant and looking into possible leases with clothing boutiques and quick-serve restaurants for the commercial ground floor.