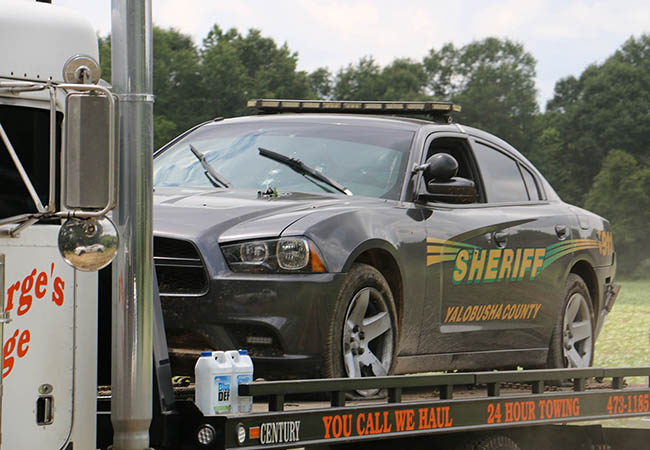 A couple from Missouri was killed in an exchange of gunfire with Yalobusha County law enforcement in the early morning hours Friday and a deputy sheriff was injured in the shootout.

Humphreys told the North Mississippi Herald that Deputy Thomas West was hit by several pellets from a shotgun blast at point-blank range and is extremely lucky to be alive. West was transported in a private vehicle to Baptist Memorial Hospital-North Mississippi in Oxford after the incident, where he was treated and released.

Another deputy and a Water Valley police officer were also involved in the shooting that occurred in a cotton field off of County Road 100 just outside Water Valley. District Attorney John Champion told The Herald  that the incident remains under investigation by the Mississippi Bureau of Investigation, but added the officers involved acted “very, very heroically” in the shootout that involved a heavy exchange of gunshots.

Humphreys said the incident started as a traffic stop on an ATV around 3 a.m. Friday morning. The ATV fled, but West located it shortly after daybreak in a cotton field after following tire tracks. As West approached the ATV, Berube stood up from behind the four-wheeler and fired at the deputy.

Humphreys said West was able to return fire in what became an intense shootout in the woods. The suspect and a female passenger on the ATV, who was with him the entire time, were able to make it back to the four-wheeler and attempted to flee again. West managed to disable the ATV during the shootout.

“I had another deputy tell me it sounded like a war,” Humphreys told The Herald.

Minutes later a second deputy and a Water Valley police officer made it to the field to back up West. By this time the Missouri couple got in West’s cruiser and attempted to flee, driving past the officers.

Humphreys said the officers disabled the car, shooting out all four tires and the engine and Berube exited the vehicle.

“He refused to comply with the commands from the deputy and Water Valley officer,” Champion added about the situation. “He had no intention of being taken alive.”

Berube was killed at the scene, while Dougan died Friday night at a Memphis hospital.

After it was all over, Humphreys said West had strong words from the ordeal.

“He told me, ‘sheriff, that man was hunting me like a dog,’” Humphreys told The Herald, explaining that every time West’s radio would go off, the man would fire at him through the woods. West was down to his last magazine when the other two officers arrived.

The sheriff said the pump shotgun used by the man had an extended magazine, a flashlight and laser sights. He also said night vision goggles were discovered near the four-wheeler.

The investigation into the shooting later lead law enforcement to a residence in Water Valley where several stolen items were found, including a pick-up truck from Lafayette County, Missouri that was reportedly in a high-speed chase with Missouri law enforcement recently.

The Mississippi Bureau of Investigation has taken the lead in the ongoing investigation. Attempts to reach an MBI spokesman for more information on Friday and Saturday were unsuccessful.