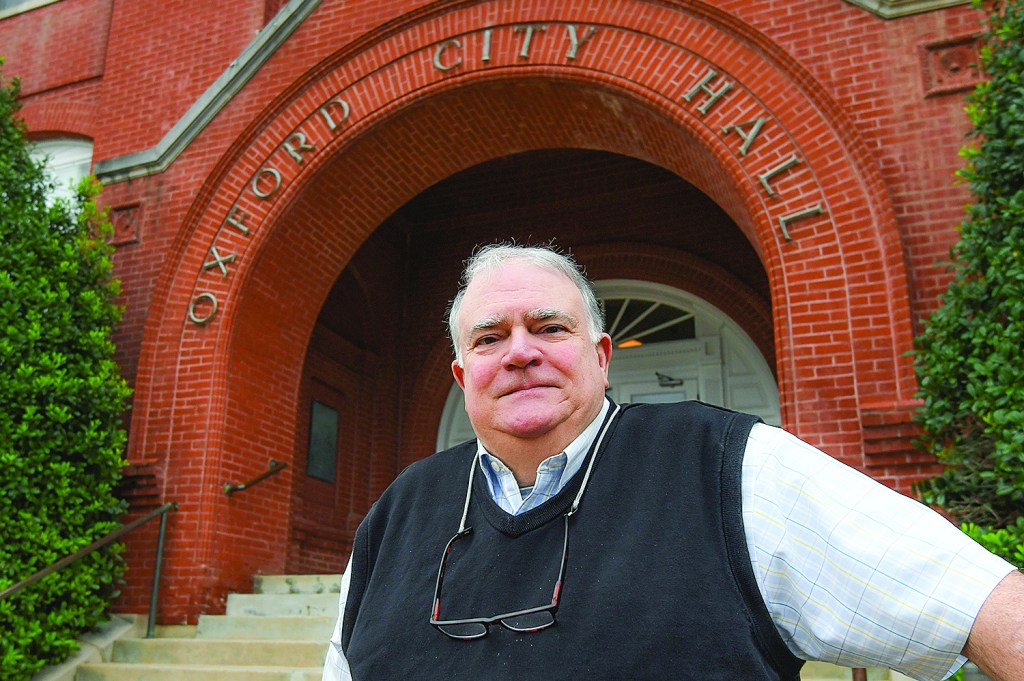 Pat Patterson is wrapping up his days at City Hall as Oxford Mayor. His final day on the job is June 29. (Photo/Bruce Newman)

It was obvious last week that Mayor Pat Patterson was preparing to leave his office, with half-empty bookshelves behind him and boxes strewn about the room.

The candy bowl that if offered to anyone who walked into his office remained full, however, as he expects to meet with much more people over the next two weeks before he hands the reigns over to Mayor-elect Robyn Tannehill.

Patterson spoke to the EAGLE of his time in office, what he’ll miss the most, the least, and what he’s sorry to leave behind.

“I’m ready to put it down,” he said, nodding. “Two terms as an alderman and two as mayor — it’s time. It calls for a fresh pair of legs.”

In December, Patterson announced he would not be seeking re-election as mayor of Oxford.

The Oxford native, whose ties to Oxford go back six generations, graduated from Oxford High School and the University of Mississippi and went on to be one of the city’s most prominent businessmen.

Mayor John Leslie appointed Patterson to the Oxford Tourism Council in the 1980s, where he served for eight years. He has also served on the Oxford-Lafayette County Chamber of Commerce and Economic Development Foundation boards. He served as an alderman for eight years before being elected in 2009 as mayor.

There are things he says he’s proud to have been involved with, like the selling of Baptist Memorial Hospital-North Mississippi to allow for Baptist to build a bigger, regional medical center and the purchase of Bell Utilities.

“I’m glad we could help Bell customers and upgrade their services,” he said. “I’m really proud of the relationship that formed between the city, county and the university. We’re able to partner on several projects. The whole community has benefited from the improved relationship.”

Patterson will leave behind many projects he has been working on, along with the Board of Aldermen, and hopes to see them come to fruition, but now, as a citizen.

“I wish I had seen the need for a new activity center sooner,” he said. “There’s the question of affordable workforce housing. We’ve done our best to answer that call. Vision 2037 plan is something we’ve worked hard on the last couple of years and the new codes should be completed in the next three to four months.”

But most of all, Patterson said he will miss the people he’s worked with on a daily basis for several years.

“It gives me some concern,” he said looking down.

Eager to move on

How did being mayor and a public servant for 16 years change Patterson?

“I think the job has pushed me from a more conservative mindset to at least more middle-of-the-road leaning toward a more liberal mindset,” he said. “Simply because local government exists to help people.”

Patterson said he’s looking forward to June 29 when he will officially become a citizen and Tannehill will be sworn in as mayor of Oxford.

“I feel like a 12-year-old on the last day of school,” he said. “I’m just going to get out and do things. I look forward to the next chapter, whatever that’s going to be. It’s truly been an honor and a privilege of a lifetime to have served the people of the LOU community. I’m certain the future is in good hands and I’ve been tremendously blessed.”