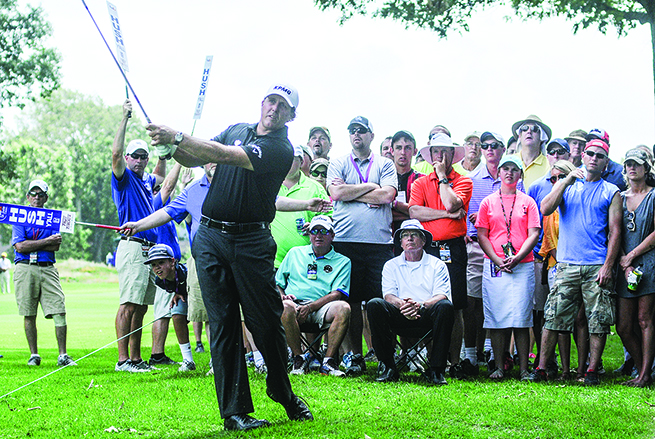 The putt. The pose. The hands to the face.

Golf fans know exactly what I’m referring to 18 years ago at Pinehurst No. 2 when Payne Stewart drained a 15-foot putt for birdie on the 18th green to win his second U.S. Open championship denying a young up-and-comer, Phil Mickelson, his first major championship.

That is not the story I am discussing today. The story I want to refer to is the one that transpired after that putt.

The U.S. Open traditionally ends on Father’s Day and the following day, Mickelson would become a father. The week of the U.S. Open Mickelson was constantly checking his pager, yes pagers existed in 1999, to see if his wife, Amy, was alerting him that she was in labor. That would prompt Mickelson to withdraw from the U.S. Open, hop on his jet and whisk away to his wife’s side for the birth of their first child.

The pager never went off and Mickelson nearly captured his first major, something that would have to wait five more years.

What did happen:  Stewart sank his putt and immediately reminded Mickelson what that Sunday was truly about, and it was far bigger than a golf tournament.

“Good luck with the baby. There’s nothing like being a father!, Stewart said to Mickelson as he grasped ‘Lefty’s’ face with his hands, pulling him close.

I tell that story to tell another surrounding Mickelson, his daughter and a U.S. Open, 18 years later.

Two weeks ago it was heavily publicized that Mickelson would be bowing out of this year’s national championship to attend his oldest daughter’s graduation in San Diego. Both were occurring on Thursday morning, the day of the first round of the 117th edition of the U.S. Open in Erin, Wisconsin. Mickelson knew it was a near impossibility to do both.

Yet, he held out hope. Or the rest of the country did.

When Mickelson arrived in Memphis for last week’s FedEx St. Jude Classic, patrons and even us reporters were not concerned about that tournament, or even this week’s. The nation was solely focused on one tee time at 2:20 p.m. CT on June 15. Mickelson’s still pending tee time.

When pressed after last Wednesday’s pro-am by the media scrum just off the 18th green at TPC Southwind, Mickelson and his answer never waivered. The choice was clear.

So, the week trudged along and Mickelson stayed slotted in his tee time with Stewart Cink and Steve Stricker. The attitude changed during the St. Jude Classic from feeling he would not make it to, a slight possibility, if Mother Nature intervened for a near four-hour rain delay.

The private plane ready to jet Mickelson across half the continent in a near-record time sat empty on a California runway. The tournament that has eluded him for 18 years went on without a hitch and without Mickelson for the first time since 1994.

On this Father’s Day, as you sit with your father, or son or daughter ready to watch someone hoist the U.S. Open championship trophy this evening remember Mickelson has twice shown there is a bigger prize than that which 156 players competed for this week.

UPDATED: Jonathan Randolph posts 71 in second round of…