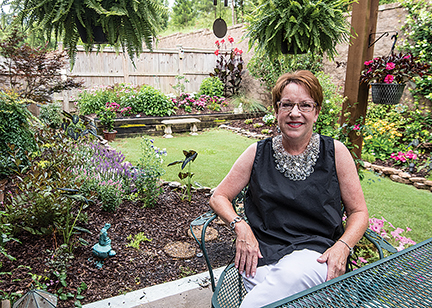 Just four short years ago, there were only two things growing in Catherine Smith’s fenced in backyard: confederate-jasmine vines and a lonely sweet olive tree. Fast forward to 2017, and the backyard now boasts an almost staggering array of colorful flowers. The garden now consists of a variety of perennials and annuals such as camellias, azaleas, black-eyed Susan’s, veronica, cross vine, and many others.

“Oh gosh no!” she said. “I think its pretty but I think there’s lots of beautiful yards in Oxford. I’m not a professional. I just play at it.”