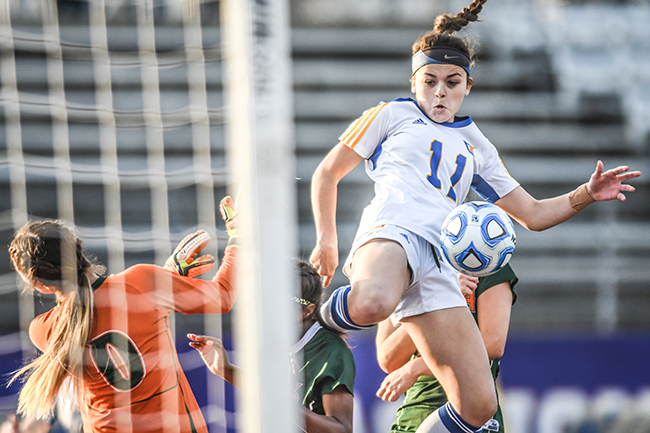 With the weight of the world on her shoulders, Morgan O’Connor made playing soccer look easy. As an eighth grader she dazzled the competition, and the fans, on her way to leading the Oxford High girls’ soccer team to their first state championship. As a freshman, she somehow found a way to play even better than last season to lead the Chargers to a second straight state title, and it people noticed.

O’Connor was named the Gatorade Mississippi Girls Soccer Player of the Year on Monday morning. The first player from Oxford to win a Gatorade Player of the Year honor since Jason Barber won it in baseball last year. O’Connor is also the first girls’ soccer player to win the award at Oxford.

“It means a lot, because I did it for my mom this year,” O’Connor said. “All the hard work my team puts in. Mississippi is not as big on soccer as where I used to live so, It’s great to be able to get (the honor) in Mississippi.”

For those unaware, O’Connor’s mom, Jennifer, has been battling brain cancer and still currently has two tumors in her brain. It was something Morgan, and her older sister Bailey, who was the senior goalkeeper, had to deal with and balance with schoolwork and soccer. Something she was able to compartmentalize at the right times, yet still never let it be an afterthought.

The team dedicated their season to Morgan’s mom, Trevor Shinall — who was also battling cancer — and to the 11 Oxford children who lost their parents in the horrific plane crash last August.

“There were definitely moments,” Oxford girls’ head coach Hunter Crane said. “Ever since I got to Oxford I’ve been close to her family. I’ve known Morgan since she was in the fifth grade. We have a really special relationship so, I could kind of tell there were moments. There were days where it would weight on her. You really saw it more in practice and just kind of everyday life. But, when the lights come she was able to compartmentalize that stuff and really channel her mom.”

On the soccer field, O’Connor dazzled with a record 55 goals this season along with 18 assists to lead Oxford on to a perfect 20-0 record for the first time in program history. In the classroom she kept a 3.33 grade point average

It is the third straight year the Gatorade Girls Player of the Year has landed in Lafayette County. Former Lafayette High standout and current Ole Miss Rebel, Ally Houghton claimed the honor the past two seasons.

“(O’Connor) is very special,” Crane said. “From last year to this year you saw her mature a lot more. She still had that fire and that want around the soccer ball. As far as her skills and her maturity it was night and day almost how different she was from there eighth grade year to her freshman (year).”

With the award comes a $1,000 grant that O’Connor can bestow upon either a national or local youth sports organization as part of the Gatorade Play It Forward campaign.