Former Oxford HC Johnny Hill, rest of 2017 class to be inducted into MAC HoF this week 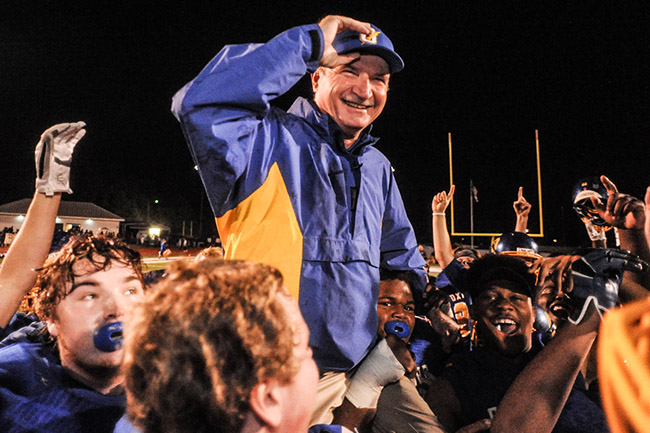 Oxford High head coach Johnny Hill is picked up by players following the game against West Point in the MHSAA Class 5A North Half playoff in Oxford, Miss. on Friday, November 27, 2015. Hill is being inducted into the Mississippi Association of Coaches Hall of Fame on Friday in Jackson. (Bruce Newman)

The announcment was made a couple months ago, but this week Johnny Hill will become a Hall of Famer.

The longtime Oxford football head coach will be enshrined into the Mississippi Association of Coaches Hall of Fame as part of the 2017 class on Friday. The ceremony will take place at the Hilton Jackson at 6 p.m.

Upon induction, Hill and the four others will increase the MAC Coaches Hall of Fame membership to 232 total (218 lifetime and 14 honorary members). The Hall of Fame was created in 1973.

Hill, who spent 41 years as a football coach, had the majority of his success at the helm of the Chargers and Tupelo. Between the two schools along Highway 6, Hill racked up a 252-95 record with five district titles, four regional titles, a Class 4A North Half title, three Class 5A North Half titles and four state championship runner-ups. Hill took Oxford to three consecutive 5A state championship games but was unable to get the Chagers that golden football trophy.

Hall is going into the Hall of Fame after a storied coaching career. He led football programs at Raleigh, Amory, Louisville, Wayne County, Madison Central and Biloxi.

The Baldwyn native graduated from Ole Miss before launching his 39-year coaching career, which would produce a 307-97 win-loss record along with 22 regional titles, 12 North Half championship appearances, two state title runner-ups and four state championships. Three of the state titles came from Amory where the Panthers posted perfect 15-0 seasons in 1994-95 and 1998. He led Louisville to a state title in 1991.

Washington is being honored for his 33-year basketball coaching career where he claimed championships at West Bolivar High in Rosedale and Jefferson County High, where he spent most of his coaching and teaching career.

Barfield also coached the boys cross-country team to 14 consecutive district titles, three state runner-ups and two Class 3A state championships. He was named the MAC track Coach of the Year in 1995.

Wilkinson is a mainstay of athletic training in Mississppi. The founder of the Mississippi Sports Medicine and Orthopedic Center has spent 39-years in the profession. He is commonly spotted at MHSAA, MAIS and MAC athletic events. The Bay St. Louis graduate got his degree from Tulane. He started his career in Orange, Texas before returning to Jackson.

Wilkinson has been an athletic trainer for U.S. Olympic teams in Sydney, Austrailia, the Pan America Games in Winnipeg, Ontario, Canada, the Goodwill Games in New York and the World University Games in Fuukuoka, Japan. He has been honored numerous times as the Trainer of the Year by the Southeastern Trainers Association which covers seven states.