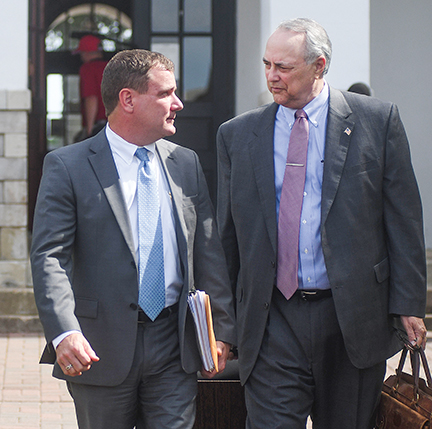 Bruce Newman Former Southaven, Miss. Mayor Greg Davis, left, with attorney Steve Farese, leaves the Lafayette County Courthouse following his trial in Oxford on Tuesday. A jury found former Southaven Mayor Greg Davis not guilty of embezzlement and fraud. The verdict came in the second day of Davis' retrial, and reversed his 2014 conviction on both charges.

OXFORD — A former Mississippi mayor was found not guilty Tuesday, after being retried on charges that he illegally bought a city-owned SUV and was reimbursed for gasoline from city pumps.

Greg Davis of Southaven had been convicted of embezzlement and fraud in 2014 in a trial in DeSoto County. But he won an appeal that he should have been tried elsewhere than the Memphis, Tennessee, suburb because of the publicity surrounding his case there.

The two-day retrial ended with a Lafayette County jury acquitting Davis, who served 16 years as mayor. In a separate civil case spearheaded by the Mississippi state auditor, Davis was ordered to repay more than $170,000 to Southaven. Tuesday, he told The Commercial Appeal he had fully repaid that amount.

“I absolutely feel vindicated,” Davis said after the verdict. “For five years, my family and friends have suffered along my side. My new boss and family have stood beside me. No one can know what it’s like to be accused of something and have to fight to prove your innocence. Finally, after five years, I can move on.”

Also a former state representative and onetime Republican nominee for a congressional seat, Davis said he now works at a Home Depot in Southaven and has no further political ambitions.

“Lord no,” Davis said with a laugh.

District Attorney John Champion, who saw his 2014 conviction of Davis slip away, said the different location was a prominent factor in the different outcome.

“It didn’t stick on this case because of the venue issue,” he said. “We put the same case on the line, and I thought our proof went in perfect.”

Davis’ 2014 trial came after months of questions about his spending as mayor. The expenses Davis was ordered to repay in the civil case included one charge at a sex shop in Canada.

One main prosecution witness, former city clerk Sheila Heath, died between the 2014 trial and now. Champion read her former testimony into the record saying she had told Davis that the state auditor had told her it would be illegal for him to buy a 2007 Ford Expedition that had been leased by the city.

Davis said Tuesday he thought Heath was confused and was referring to the proposed purchase of a used police car.

“That’s not what she said,” Champion said.

But defense attorney Steve Farese argued there was never any solid evidence that Davis did anything illegal.

“What I really tried to hammer on — and it was a very delicate dance — was the lack of witnesses,” Farese said. “We didn’t have an investigator, we didn’t have anyone from the auditor’s office. We just had testimony from someone who has passed away and innuendo.”