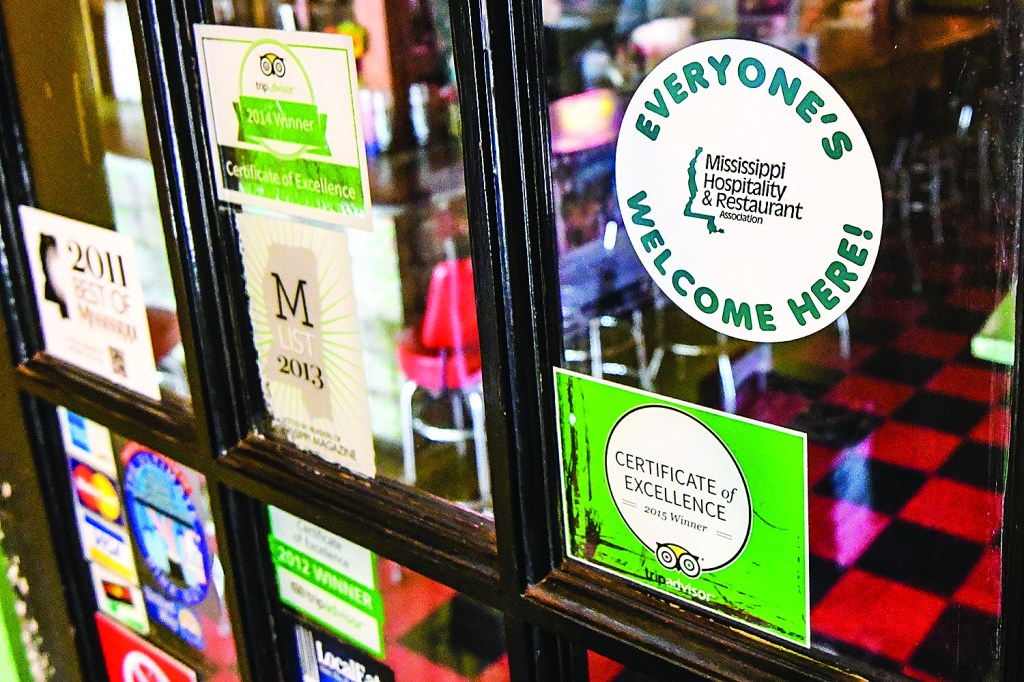 Stickers displaying a message welcoming everyone are visible at restaurants on the Square. The Fifth Circuit Court of Appeals has reversed a lower federal court’s decision to strike down Mississippi House Bill 1523, allowing the law to take effect. (Photo/Bruce Newman)

JACKSON — A federal appeals court said Thursday that Mississippi can enforce a law that allows merchants and government employees cite religious beliefs to deny services to same-sex couples, but opponents of the law immediately pledged to appeal.

A three-judge panel of the 5th U.S. Circuit Court of Appeals reversed a judge’s decision that had blocked the law.

The law does not take effect immediately. Plaintiffs are allowed time to appeal.

The 5th Circuit panel did not rule on whether the law is constitutional. It said plaintiffs failed to prove they would be harmed by the law, “but the federal courts must withhold judgment unless and until that plaintiff comes forward.”

Legal experts said the law, which started as House Bill 1523, is the broadest religious-objections measure enacted by any state.

Championed and signed in 2016 by Republican Gov. Phil Bryant, it aims to protect three beliefs: marriage is only between a man and a woman; sex should only take place in such a marriage; and a person’s gender is determined at birth and cannot be altered. It would allow clerks to cite religious objections to recuse themselves from issuing marriage licenses to same-sex couples and would protect merchants who refuse services to LGBT people. It could affect adoptions and foster care, business practices and school bathroom policies.

Robert McDuff, an attorney for some of the people who sued to try to block the law, criticized the appeals court for saying plaintiffs had failed to show they would be harmed.

“People should not have to live through discrimination in order to challenge this obviously unconstitutional bill,” McDuff said.

Roberta Kaplan, an attorney who represented some of the other plaintiffs, said her clients have been harmed.

“The state communicated a message loudly and clearly with the passage of HB 1523: Only certain anti-LGBT beliefs will get the protection and endorsement of the state,” Kaplan said. “Under the logic of this opinion, it would be constitutional for the state of Mississippi to pass a law establishing Southern Baptist as the official state religion.”

Kaplan and McDuff said they will appeal the decision by the 5th Circuit panel. Kaplan said she will ask the entire 5th Circuit to reconsider the arguments; McDuff said he will either do that or appeal to the U.S. Supreme Court.

McDuff said that when — or whether — the law will take effect depends on the outcome of the appeal.

Gay and straight plaintiffs who sued the state say the law gives “special protections to one side” in a religious debate.

Supporters say the law protects Mississippians’ rights to live out their faith.
“As I have said all along, the legislation is not meant to discriminate against anyone, but simply prevents government interference with the constitutional right to exercise sincerely held religious beliefs,” Bryant said Thursday.

Kevin Theriot (TAIR-ee-oh) is an attorney for Alliance Defending Freedom, an Arizona-based Christian group that helped to write the Mississippi law. He praised the appeals court decision.

“The sole purpose of this law is to ensure that Mississippians don’t live in fear of losing their careers or their businesses simply for affirming marriage as a husband-wife union,” Theriot said Thursday. “Those who filed suit have not and will not be harmed but want to restrict freedom and impose their beliefs on others by ensuring dissenters are left open to the government discrimination that has already occurred in states without protective laws like this one.”

Douglas NeJaime (KNEE-jame), a UCLA law professor, is faculty director of the Williams Institute, which researches issues dealing with sexual orientation, law and public policy. He testified in June 2016 on behalf of plaintiffs who sued to block the Mississippi religious objections law. NeJaime said Mississippi was the only state to enact a law that lists specific religious beliefs to be protected in reaction to the 2015 legalization of same-sex marriage.

Top Mississippi Republican lawmakers are praising a federal appeals court for saying the state can enforce a law that would let merchants and government workers cite their religious beliefs to deny services to same-sex couples. LGBT advocates say the law is discriminatory and puts people in danger. More appeals are expected, which will delay enforcement of the law that started in 2016 as House Bill 1523.

Republican House Speaker Philip Gunn, who voted for the bill: “The whole objective was to protect religious freedoms.”

Brandiilyne Mangum-Dear, who sued to try to block the law and also is pastor of Joshua Generation Metropolitan Community Church in Hattiesburg: “We had to put guards in front of our church after the bill initially passed because there was a truck with a swastika parked across the street and just this week the Christian Knights of the KKK distributed flyers throughout the Hattiesburg area. Today’s ruling leaves us more exposed, so we will have to be more vigilant than ever before to protect our church, our families and our dignity.”

Republican Lt. Gov. Tate Reeves, who supported the bill: “House Bill 1523 simply protected Mississippians from government interference when practicing their deeply held religious beliefs, and I appreciate the 5th Circuit clearing the path for this law to take effect.”

Rob Hill, Mississippi director of Human Rights Campaign, a gay rights group: “This law — now the most discriminatory, anti-LGBTQ state law in the country — was rooted in hate, it targets the LGBTQ community and it is a deliberate attempt to undermine marriage equality and the dignity of LGBTQ Mississippians who lawmakers have sworn to serve and protect. We will continue to fight tooth and nail against HB 1523 until it no longer threatens our community.”

Forest Thigpen, president of Mississippi Center for Public Policy, a conservative group that pushed for the law: “While the 5th Circuit did not engage on the merits of this case, it did reach the right conclusion by allowing the law to finally go into effect. This law strikes a balance between competing rights. It restrains government from penalizing people who hold sincere beliefs about marriage and gender.”

Beth Orlansky, advocacy director for the Mississippi Center for Justice: “This law is discriminatory, and we will do everything we can to prevent it from causing any more harm. By promoting a law that singles out a particular group for discriminatory treatment, the state of Mississippi sends a message to the rest of the country that not everyone is welcome in the ‘Hospitality State.'”