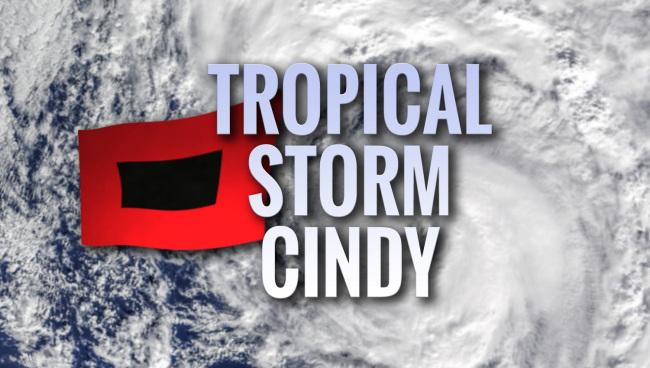 The National Weather Service has issued a Flash Flood Watch for most of north of Mississippi, including Lafayette County starting at 1 p.m. today through midnight Saturday.

As the center of the storm heads northeastward toward the lower Tennessee Valley, feeder bands will douse the area producing 3 to 5 inches of rain, according to the NWS.

Oxford Emergency Management Coordinator Jimmy Allgood said the bands could produce thunderstorms with wind gusts up to 25 to 30 mph.

“A cold front is moving down and will meet with Cindy at some point,” he said. “That may lead to the development of more severe thunderstorms tonight and into Friday.”

Those storms could produce torrential downpours and an isolated tornado.

“It depends on where the cold front and Cindy meet,” he said.

Allgood said the biggest threat from the storm, however, will be the rain.

“If you live in a low-lying area, there is the potential for flash flooding,” he said.

The rain is expected to taper off late Friday night as the system moves into the middle Ohio River Valley and points east.

Be careful on roadways

The Mississippi Department of Transportation is warning Mississippians to avoid travel if possible over the next two days. For those who do, MDOT reminds drivers to not try to drive through a flooded area, avoid night travel when possible and check the status of road conditions by visiting MDOTTraffic.com, using the MS Traffic mobile app or dialing 511.

“MDOT maintenance crews across the state are trained to keep roads safe and experienced in dealing with severe weather conditions on highways in Mississippi,” said Melinda McGrath, MDOT executive director. “MDOT crews are prepared for first response efforts and debris removal, and have fueled up vehicles, sharpened chainsaws and implemented preparedness plans.”

The storm’s eye came ashore early this morning in southwestern Louisiana, bringing rain and the threat of flash flooding and tornadoes.

The U.S. National Hurricane Center says Cindy’s maximum sustained winds have decreased to near 40 mph with continued weakening expected over the next two days.

Already, the storm has been blamed for one death Wednesday: A 10-year-old boy from the St. Louis area was killed on an Alabama beach when he was struck by a log that washed ashore.