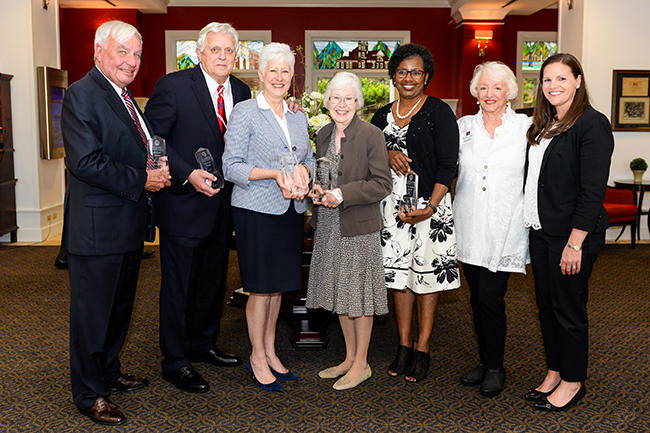 The University of Mississippi School of Education recently inducted the third class of alumni into its Hall of Fame.

Collectively, the six inductees have more than 200 years of wisdom, experience and commitment to education and public service in Mississippi and across the country.

The 2017 honorees are Thomas R. Burke of Kansas City, Kansas; Laura Dunn Jolly of Ames, Iowa; Robert C. Khayat of Oxford; Jean M. Shaw of Oxford; and the late Theopolis P. Vinson of Oxford. Carole Lynn Meadows of Gulfport, the second recipient of the School’s Outstanding Educational Service Award, also was recognized during the May 12 ceremony at The Inn at Ole Miss.

The School of Education Alumni Board of Directors selected honorees from nominations submitted earlier this year.

Burke began his educational journey at Ole Miss in 1969, earning a bachelor’s degree in 1970 and a master’s degree in 1972 – both in history – and a doctorate in higher education in 1981. From there, he embarked on a distinguished 39-year career at four community colleges.

Burke progressed in roles at Kansas City Kansas Community College from history professor to dean of instruction to vice president and then president of the institution in 1992, a position he served 19 years until his retirement in 2011. Burke is also a member of the Mid-America Education Hall of Fame and The Thomas R. Burke Technical Education Center was named for him.

“It is certainly a high recognition from the School of Education, which I am honored to receive,” Burke said. “In my career, I learned more from my mistakes than my successes.”

Jolly, who is dean of College of Human Sciences at Iowa State University, received a bachelor’s degree from UM in 1977 before completing master’s and doctoral degrees from Oklahoma State University. She has a 38-year tenure with six different institutions of higher learning.

Jolly received a Taylor Medal from Ole Miss in 1977, earned Georgia’s Most Powerful and Influential Women Award from the National Diversity Council in 2011 and was named among “100 Graduates of Significance” by the graduate school at Oklahoma State in 2012.

“I am truly honored,” Jolly said. “As I think about it, Ole Miss was such an important part of my educational foundation. It’s really wonderful to be recognized in this way. I feel very honored and humbled.”

Khayat, the university’s 15th chancellor, earned a bachelor’s degree from the School of Education in 1961. He returned to obtain a Juris Doctor from Ole Miss in 1966 and then a Master of Law from Yale University in 1980.

As chancellor, he transformed the university by raising more than $900 million in gifts, establishing the Sally McDonnell Barksdale Honors College, attracting a Phi Beta Kappa chapter and hosting a presidential debate, among many other accomplishments. He also published a book, “The Education of a Lifetime,” which chronicles his life and times at Ole Miss.

“If teaching is what makes you happy, I doubt you could find a better thing to do that would be more rewarding than teaching,” Khayat said. “I’ve taught eighth-grade science and I’ve taught law school. I’m so thankful my road took me to education and higher education and being able to teach.”

A math and science educator, Shaw taught students from pre-kindergarten to graduate school for more than 40 years, including 30 years – 1976 to 2006 – at Ole Miss.

“As a teacher educator, I had a lot of opportunities,” Shaw said. “I had the opportunity to meet people, to go to conferences, to speak at conferences, to be on editorial boards and work with very talented people. Working alongside dedicated educators and student teachers was an honor.”

Vinson, the first deceased person to be inducted into the school’s Hall of Fame, earned a master’s degree in 1982 and a doctorate in 1997, both from UM.

A former teacher, he joined the staff of the School of Education in 1989 by serving as director of undergraduate student advising and field experience and assistant dean. He also worked with the Mississippi Teachers Corps, serving in Mississippi’s most critical needs school districts.

Meadows has completed 27 years as a teacher, 22 of those at Mississippi Gulf Coast Community College. She is co-founder of the nationally renowned Lynn Meadows Discovery Center, the first children’s museum in the state, in Gulfport.

“What could be better than to be recognized for what you have done all your life with passion,” Meadows said. “We have an enormous role as teachers and educators. We are molding what’s to be.”