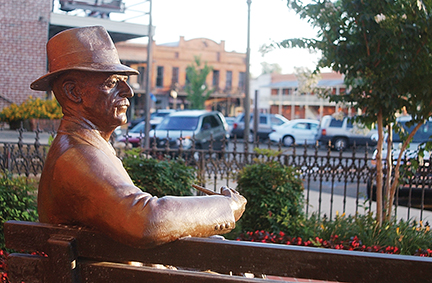 Bruce Newman Hundreds are expected to take part in the University of Mississippi’s annual Faulkner & Yoknapatawpha Conference, set for July 23-27. This year’s event will explore the economies of Yoknapatawpha and beyond.

“Faulkner and Money: The Economies of Yoknapatawpha and Beyond” is the theme for the University of Mississippi’s 44th annual Faulkner & Yoknapatawpha Conference, set for July 23-27.

Five days of lectures, panels, tours, exhibits and other presentations will explore the multifaceted economies of Yoknapatawpha County, the Faulkner oeuvre and the literary profession. Besides three keynote lectures, the conference program will include panel presentations, guided daylong tours of north Mississippi and the Delta, and sessions on “Teaching Faulkner.”

“This year’s theme was actually suggested a decade or more ago by one of the legendary figures of Faulkner studies, the late Noel Polk, who often mentioned how fascinating, and entertaining, a conference would be on Faulkner and money,” said Jay Watson, Howry Professor of Faulkner Studies and professor of English who serves as director of the conference.

“More recently, the program committee had contemplated building a conference around the slightly wider theme of Faulkner and economics. So two years ago, we decided to combine both the specific subject of money and the more general topic of economics and came up with ‘Faulkner and Money: The Economies of Yoknapatawpha.’”

This year’s subject is rewarding for a number of reasons, Watson said.

“First of all, William Faulkner spent his first 25 years or more as a serious writer of fiction in almost constant financial difficulty,” he said. “He had trouble supporting his extended family off his writing alone, and he worried all the time about money.

“His own financial arrangements, both personal and professional, his relationship to the literary marketplace and his search for other sources of income available to established writers all have the potential to shed important light on the profession of authorship in 20th century America.”

Additionally, and for some of the same reasons, Faulkner’s fiction is especially rich in economic content: money problems, elaborate business arrangements, convoluted bets and wagers, get-rich-quick schemes and con games.

“His people — and sometimes individual characters — run the gamut from enormous wealth to miserable poverty,” Watson said. “Many are unduly preoccupied with money, much like their creator.

“There’s a lot to learn from Faulkner’s work about the economics of rural and small-town life, of the South and of modern America. We’ll be exploring all of these issues in July.”

The conference will begin with a reception at the University Museum, after which the academic program of the conference will open with two keynote addresses, followed by a buffet supper on the grounds of Faulkner’s home, Rowan Oak. Over the next four days, a busy schedule of lectures and panels also includes an afternoon cocktail reception, a picnic at Rowan Oak, the guided tours and a closing party on Thursday afternoon.

The “Teaching Faulkner” sessions will be led by James B. Carothers, of the University of Kansas; Terrell L. Tebbetts, Lyon College; Brian McDonald, Lancaster, Pennsylvania School District; Charles Peek, University of Nebraska at Kearney; and Theresa M. Towner, University of Texas at Dallas.

Throughout the conference, the university’s J.D. Williams Library will display Faulkner books, manuscripts, photographs and memorabilia. The University Press of Mississippi will exhibit books of interest published by university presses throughout the country.

Faulkner collector Seth Berner is organizing a display of his collection, with books for sale. Berner also will give a brown bag lunch presentation on “Collecting Faulkner.”

Also, collaborators on the Digital Yoknapatawpha Project, a database and digital mapping project at the University of Virginia, will present updates on its progress at a special conference session.