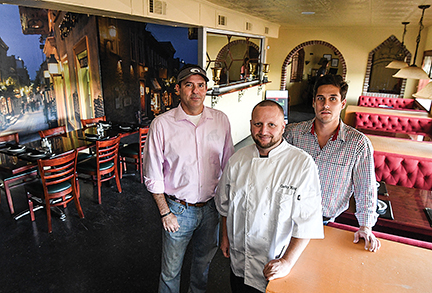 Adam Mathews, from left, Corby King, and Wylie Coleman are the co-owners of King’s restaurant, located on College Hill.

Before opening their new restaurant, King’s, owners Corby King, Adam Mathews and Wylie Coleman all took their own unique path through the worlds of food, drink and business before coming together.

Back in 2003, after getting out of the military, and having never cooked before in his life, King took a fry-cook job somewhat on a whim simply to kill the remaining time he had on a lease. Lo and behold, however, it stuck.

King entered culinary school at Le Cordon Bleu and subsequently worked under renowned chefs Wolfgang Puck and Emeril Lagasse. King relocated to Oxford in March 2016, eventually working with Coleman at a restaurant on the Square.

Coleman, on the other hand, attended Ole Miss and tried his hand at the business world out of school.

“I went out in the real world and sat behind a desk and couldn’t really do that,” Coleman said. “Being active and on your feet is a different kind of work. When you enjoy your work, you don’t work a day in your life.”

While Coleman and King worked together at the same restaurant, Mathews entered the picture as the restaurant’s food supplier. Prior to this job, Mathews had abundant experience as a bartender, starting in the early ‘90s in Oxford and including stints in Breckenridge, Colorado, and Destin, Florida.

Each owner draws on his distinct background and experience in his role at King’s, with King running the kitchen, Mathews manning the bar and Coleman taking care of the front of the house.

“It’s really the collaboration of about 35 or 40 years of restaurant experience from the kitchen, to the front of the house, to the bar,” Coleman said. “The opportunity opened up for all of us to unite.”

Concentrating primarily on steaks and seafood, King’s is already seeing success thanks to their commitment to top-notch ingredients, such as their high-quality beef that is aged for a minimum of 35 days, as well as a variety of weeknight specials.

On Tuesday, there are two-for-one bottles of wine, tamales, and special “steakhouse-influenced” tacos, featuring ingredients such as rib eye steak, duck and lamb.

Thursday and Monday have already emerged as their busiest nights, and they strongly encourage making reservations in advance.

The owners also strongly encourage customer feedback, as they continue to refine their selections.

“We try to be a customer-based restaurant,” King said. “Between the three of us, we have a lot of connections from food to wine to beer, so if they ask us for something, we can probably make it happen.”

Located at 1007 College Hill Road, King’s had opportunities to open on the Square, but the owners consciously chose to move to a more secluded, yet still accessible area, providing a respite in a unique atmosphere away from the crowded Square.

“We want to be away, off the beaten path,” Mathews said. “We’re only a mile from the Grove. We have all our own parking, so there are no obstacles when it comes to that.”

The owners also pointed out the versatility of the 5,800 square feet space and said that they are open to hosting parties of any and all sizes. Coleman also mentioned the many different environments King’s can offer under one roof.

King’s has been hosting live music on Thursdays, but because of the popularity of their Thursday night specials, they are having to rethink their music schedule simply to have the space to accommodate musicians, Coleman said. Moving forward, they will likely host live music every other week on either Friday or Saturday, courtesy of local artists.

According to the owners, the plan does not stop in Oxford. They are looking to build something bigger and expand to additional locations in the future.

Having just recently expanded their weekly schedule from four days to six, they emphasized the importance of growing at a responsible, sustainable rate so as not to lose focus on the quality of the experience for customers.

“We could’ve started off 100 miles per hour, but we took our time, and our patience has rewarded us,” King said. “Going from Monday to Saturday has always been an option, but we waited until we were ready for that.”

Now that the summer menu and schedule are set, King’s is looking forward to the future, but always with the emphasis on the customer.

“We want to figure out what the people want next, and we’re going to work towards that,” Coleman said.