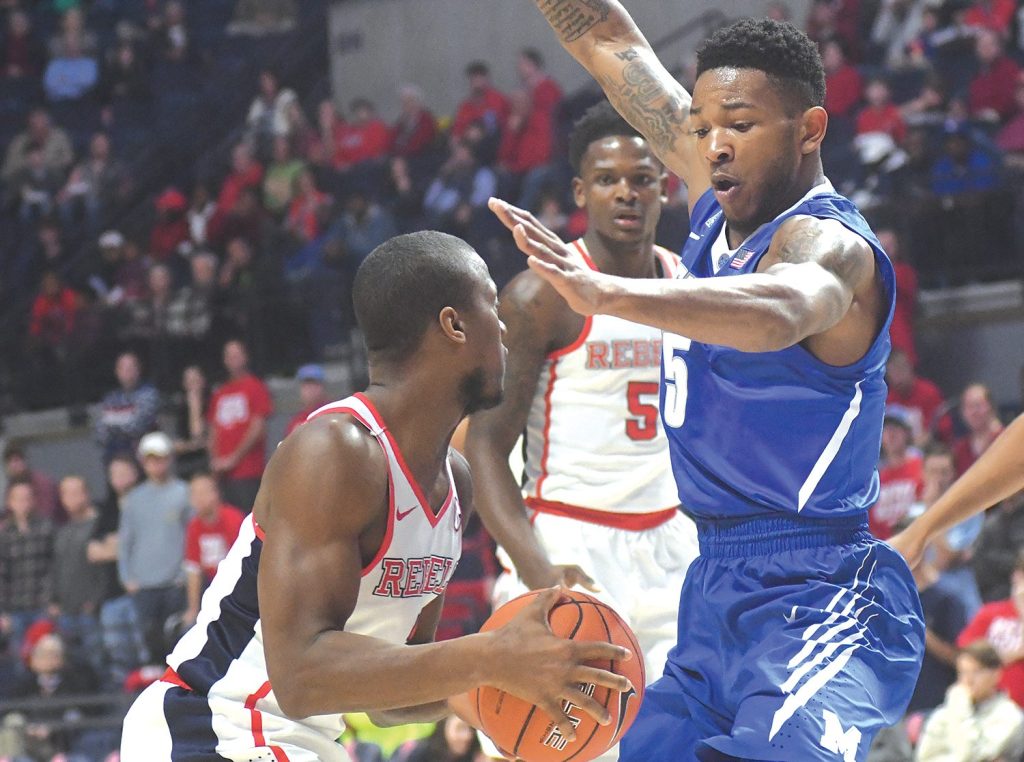 Memphis guard Markel Crawford 5) guards Ole Miss Deandre Burnett at the Pavilion at Ole Miss, in Oxford, Miss. on Saturday, December 3, 2016. Crawford transferred to Ole Miss in the spring and has one year of eligibility left. (Bruce Newman, Oxford Eagle via AP)

Even while playing on the other side of Ole Miss’ games against Memphis the last two seasons, Markel Crawford kept a close eye on the Rebels.

In particular, Crawford couldn’t help but notice the freedom with which Stefan Moody, Terence Davis and some of Andy Kennedy’s other guards have been able to play with in recent seasons. So when Crawford made the decision in the spring to use his final year of eligibility somewhere other than Memphis, it was one of the handful of reasons Ole Miss became his destination.

“Coach Kennedy has always been big on guards,” Crawford said. “The two years I played them, the guards were playing so free and playing with the utmost confidence. And that was something I was looking at like, ‘Man, I’d love to play there.’ And it played out the right way.”

Crawford, a two-year starter at Memphis who finished as the Tigers’ second-leading scorer last season, drew interest from some of college basketball’s top programs as a graduate transfer, including Baylor, Gonzaga and Florida. But Crawford said he never visited any of them after leaving Memphis because there wasn’t any point.

The Rebels signed Crawford in April, adding an experienced piece Kennedy hopes can help Ole Miss take the next step after settling for a National Invitation Tournament berth last season. The 6-foot-5 Crawford further bolsters a backcourt that has most of its production returning in Davis and Deandre Burnett, the Rebels’ top two scorers last season, as well as point guard Breein Tyree.

Crawford spent most of his minutes off the ball at Memphis, but Kennedy said there’s no shortage of areas in which Crawford can help his new team.

“He even played some (point guard) just based on their roster situation last year, so we feel like he can give us a primary ballhandler,” Kennedy said. “He led them in 3-point percentage. He’s really a strong, big guard, so he can score in the mid-range.

“He was good on the glass. He’s athletic. He can defend multiple positions. The thing that is so compelling is the fact that he’s played so many minutes in big games, so we anticipate him being able to come in and aid to what we already have returning.”

Crawford averaged 12.8 points and 4.4 rebounds last season while shooting 33 percent from 3-point range and nearly 76 percent from the free-throw line. He averaged 11 points and 4.5 rebounds against Ole Miss the last two seasons when he saw the Rebels’ style of play under Kennedy up close.

“High tempo,” Crawford said. “If you can play, he’s going to keep you on the floor, so I just have to produce.”

Crawford was part of mass attrition within Memphis’ program following Tubby Smith’s first season at the helm that saw six players transfer. Crawford said he couldn’t speak for anybody else, but for the Memphis native, transferring meant a chance to get away from home.

“It (was) sort of a time to get away from Memphis,” Crawford said. “For me, it was a lot of distractions, my hometown. So for me, just getting away and getting that sort of college feel for my last year.”

But Crawford admitted he didn’t want to go too far. He has a son while his mother doesn’t like to fly, which made the Southeastern Conference school an hour down the road an ideal fit. A pre-existing relationship with Kennedy and the rest of the Rebels’ coaching staff, which recruited Crawford out of high school, didn’t hurt either.

“There were a lot of factors that made a lot of sense,” Kennedy said.

Now that his transfer is complete, Crawford’s focus is on being a factor for a team trying to end a two-year NCAA Tournament drought.

“A guy that plays both ends,” Crawford said. “Great shooter, great defender, just a guy that wants to win and despises to lose. I think if I bring that energy to the team, we’ll surprise a lot of people this year.”