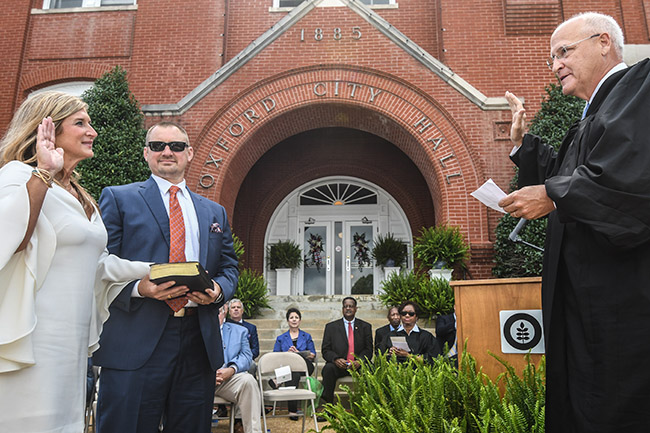 Robyn Tannehill, left, with her husband Rhea, center, holding the Bible, takes the Oath of Office from Judge Andy Howorth outside City Hall in Oxford, Miss. on Thursday, June 29, 2017.

Standing in front of City Hall on Thursday, Mayor Robyn Tannehill and the Oxford Board of Aldermen, took their oaths of office, each promising to “faithfully and impartially perform and discharge the duties” to which they will be tasked with for the next four years.

Tannehill chose to make her first official duty recognizing and thanking the hundreds of city employees who work each day to make Oxford a clean, beautiful and safe home for its citizens.

“By 8 a.m., more than 500 employees are keeping our water running, our sewage processes, our lights on, our streets open, our courts operating, our buses running, our flowers blooming, our building projects inspected – and yes, our parking spaces monitored,” she told the large crowd who gathered in front of City Hall to witness her inauguration. “Without their hard work and dedication, Oxford would not be the town we all enjoy today and I am humbled to be elected by this community to serve along side of you.”

University of Mississippi Chancellor Vitter congratulated Tannehill and thanked the Board of Aldermen for their leadership and outgoing Mayor Pat Patterson for his years of service.

“Ole Miss is extremely lucky to be in Oxford,” Vitter said. “Our strong working relationship between the university and the city of Oxford are essential for our success … We know growth comes with benefits as well as challenges and we can work together to preserve that small-town feel that makes our town so special as we welcome the benefits of growth.”

Lafayette County Board of Supervisor President Jeff Busby said he and his fellow supervisors look forward to continuing several joint projects started under Patterson’s mayoral reign, including new roads, a new county court and services building and the expansion of the Oxford Activity Center expansion.

In his final words as mayor, Patterson said it was a difficult task to find the right words to express how grateful he is to the city of Oxford, its employees and its citizens.

“Over the last few months I’ve been asked many times what my future plans are,” he said. “I think those questions are best answered by the old proverb, ‘Smile because it happened. Do not cry because it’s over.’ … Something else to smile about is the future of the community. With leaders like Robyn Tannehill, Jeff Busby and Jeffrey Vitter, and this incoming board of aldermen, and the dedicated staff of the city, county and university, the future is indeed in good hands.”

Jim Dees of Thacker Mountain was the emcee for the event. The Oxford Police Department’s Honor Guard presented the colors and the Oxford First United Methodist Church’s Youth and Children’s Choir performed several songs. Musical group The Reformed Ramblers provided music before and after the swearing-in ceremony.

In her closing remarks, Tannehill said she and her board cannot do their jobs without the support of all Oxonians.

“It takes buy-in from every member of this community. Takes buy-ins from every single of one you,” she told the crowd. “I believe in Oxford. I believe that we have proven ourselves that in tough times we all come together and when we face a challenge together, we defeat it. So I invite you, everyone one of you, to join us in this mission of making Oxford better than we’ve ever seen before. Together we can do it.”