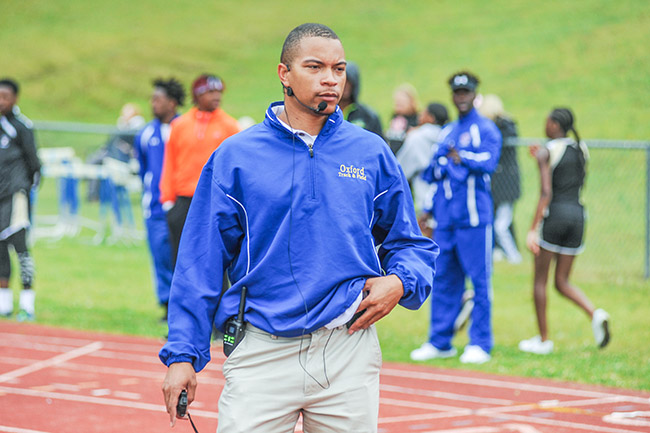 Oxford High coach Chris Bush at Class 5A Region Meet at Bobby Holcomb Field in Oxford, Miss. on Thursday, April 14, 2016. Bush announced Thursday that he is stepping down as the boys head coach to take over as the new assistant principal at Oxford High School. (Bruce Newman)

The most dominate track team in north Mississippi the past few years is having a change at the top. Boys head coach Chris Bush is stepping down to become the new assistant principal at Oxford High School, effective this year.

Bush, a former four-year Oxford High track star himself, has led the Chargers for the past five years — after spending one season as an assistant coach — and helped bring four consecutive state championships to the program.

“There was an old guy in church when I was little and he always responded, ‘If you gotta leave, leave while everything’s in good condition and leave while you’re on top,” Bush said. “I’ve definitely had some great success but if it was time to leave, I’m glad I can leave the program better than I found it. It’s never an easy decision because you have a bond with those kids, but fortunately at the high school I’m still going to get to see those kids day in and day out.”

The opportunity to become one of the new assistant principals opened up after this past school year ended and Bush, who has a masters degree in administration jumped at the chance.

The boys track team will not be left searching for a new coach as current girls head coach Chris Patton will be moving over to replace Bush in that role. Former Oxford coach Jamie Perkins is returning to help Patton coach the girls team.

“I am coaching the boys, but I’ll still cross-over and coach some of my girls as well,” Patton said. “I still feel it’s my team. It won’t feel different.”

An Oxford native son, Bush wanted this new challenge as a way to give back to the town that raised him and the school district that watched him grow up.

“It’s always great to be put in a position to where you can dedicate your time and energy to give back to your community,” Bush said. “I’m very happy to have the opportunity.”