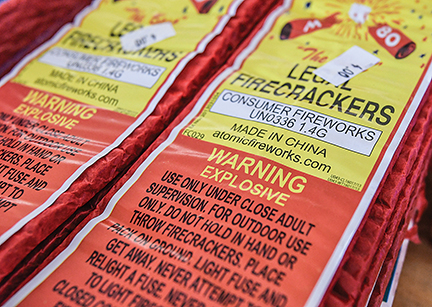 Bruce Newman Fireworks should be used with extreme caution and warning labels should be followed.

Summer is in full swing, and America’s largest celebration is quickly approaching. The Fourth of July is a time to appreciate The United States, throw a pool party, and fire up the grill. However, when most people think of Fourth of July, one thing commonly comes to mind: fireworks.

When used with extreme caution and in a safe area, fireworks are a great way to celebrate America’s independence, and can be a fun activity with family and friends.

Due to the popularity of fireworks, many roadside firework stands tend to pop up during this time of year. This year, the Senatobia-based firework superstore Crazy Rob’s Fireworks has set up a tent off of Highway 7, just passed Oxfords city limits.

It offers a wide variety of fireworks ranging from sparklers to elaborate mortar tube displays.

According to Shea Moore, who helps operate the Crazy Rob’s Firework tent, mortar tubes and artillery shells are aong the most popular items bought.

“The USA’s, which is an assortment that comes with a little bit of everything is something we also sell a bunch of,” Moore said.

Luckily for firework enthusiasts and Crazy Rob, the state of Mississippi “allows all or most firework types,” according to ABC7NY.com. There are only four states that ban all types of fireworks and the list reads as Delaware, Massachusetts, New Jersey and New York.

All though they are legal in Mississippi, the use of fireworks within the city limits is prohibited. Oxford’s city ordinance states: “Except as hereinafter provided, it shall be unlawful for any person to sell, offer for sale, store, display, or have in their possession, or use or explode anywhere in this city, any firecrackers, Roman candles, torpedoes, sky rockets, pyrotechnic special-effect materials and any and all explosives which are now or may hereafter be classified as ‘common fireworks.’”

Since Crazy Rob’s tent is technically not in Oxford, fireworks can be legally sold and purchased.