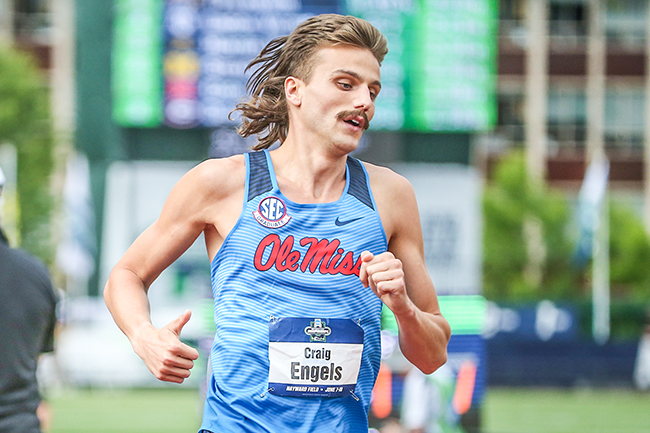 Craig Engels was out to lunch with his mother and grandmother during the NCAA outdoor championships last month when a text message from his girlfriend telling him to check his social media accounts gave him an idea of just how quickly his newfound fame was growing.

“I didn’t want to stop hanging out with my parents,” Engels recalls with a laugh. “When I got home, I saw I was tagged in ESPN’s photo. Thought that was pretty crazy.”

Life hasn’t slowed down much for him since.

The former Ole Miss middle-distance runner went viral during the NCAA outdoor meet with his thick mustache and flowing mullet that looks straight out of the 1980s. Engels says he’d like to be known for his running, too — he earned first-team All-America honors after finishing third in the 1,500 meters in his final race as a Rebel — but his hairy look is undoubtedly his most identifiable trait.

That’s not to say it bothers Engels, whose sport was part of his motivation to start growing his hair out some eight months ago.

“Running is a hard sport to follow just because it’s not publicized much and we race sparsely,” Engels says. “Anything that can get people interested remotely in the sport is cool. I’m pumped that people recognize me for my look.”

The other reason Engels wanted to go with a unique look was to market himself to companies in hopes of getting a professional running career started. The move paid off as Engels signed a contract with Nike shortly after the NCAA outdoors.

Now that he’s accomplished everything he set out to with his mullet-‘stache combination, there’s not much use for it anymore. Engels says Nike “loves” the look, but his contract doesn’t require him to keep it.

Engels says he’ll likely cut his hair and mustache once his season ends in September unless he can find a charitable organization to donate his hair to before then.

“It’s really hot,” Engels says. “It was 110 degrees when we were racing, and everyone had ice packs on them and I had a freaking fur jacket on my neck.”

The focus will then solely be on Engels’ running, something with which he’s far from satisfied.

A native of Pfafftown, North Carolina, Engels transferred from North Carolina State three years ago after suffering multiple hip injuries. He didn’t miss any time at Ole Miss, turning in numerous top-10 finishes in indoor and outdoor events over his final three seasons, but the competitor in Engels wants more.

“I just want to win,” says Engels, who finished fourth in the 1,500 at the USA Track & Field championships last weekend in his first race as a professional. “I hate to lose so much more than everyone else. At this level, we’re all pretty competitive, but I hate losing.”

Engels’ next chance to compete comes today in the USATF summer series in Portland, Oregon, where he’ll be running for more than money. Engels needs to run the 1,500 in less than 3 minutes, 36 seconds to meet qualifying standards for a chance to still represent Team USA in the IAAF World Championships in London in August.

That pace would be the equivalent of running a mile in approximately 3:52, though Engels has come close. His personal-best time in the 1,500 is 3:37.66 set during last year’s Olympic trials.

Engels’ contract with Nike is a three-year deal that will run through the 2020 Summer Olympics, an event in which he hopes to participate. He’ll wait to see how things are going then before deciding which direction he wants to take his career. He has already graduated and is pursuing his master’s degree in business administration.

“I’m not going to be one of those guys that’s still chasing the dream when I know I’m washed up,” he says.

For now, Engels’ only concern is the next race as he enters the prime of a career that’s quickly blowing up.

“There’s so many things I have to do to get my life going right now,” Engels says. “Thankfully I signed with an agent that took over a lot of the stress or else it would be pretty tough to do this all on my own. My mind is still racing right now.”