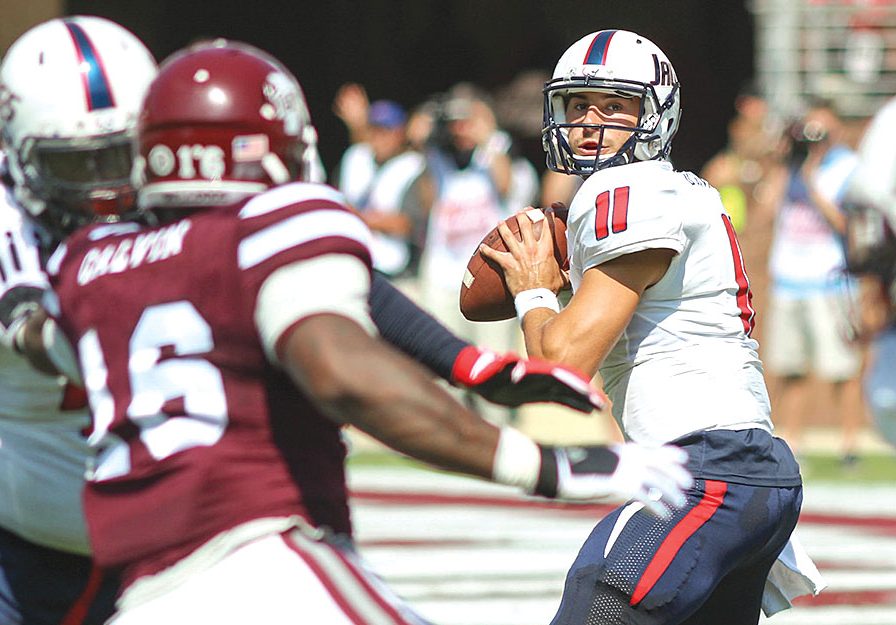 Sophomore quarterback Dallas Davis (11) is back to help lead a South Alabama team that won’t be intimidated by an SEC road environment when the Jaguars visit Ole Miss on Sept. 1 for both teams’ season opener. (Walter Frazier)

WRITER’S NOTE: This is the first of a 12-part series breaking down each of Ole Miss’ opponents for the 2017 season.

South Alabama needs no introduction when it comes to college football in Mississippi.

Ole Miss’ first opponent of the 2017 season will visit Vaught-Hemingway Stadium on Sept. 2, less than a year after the Jaguars stunned the Rebels’ in-state rival. South Alabama pulled off its biggest win last season with a 21-20 win over Mississippi State in both teams’ season opener.

South Alabama won just five more games the rest of the season and finished tied for next to last in the Sun Belt Conference with a 2-6 league mark, but it meant another bowl game for a school that didn’t start playing football until 2009. South Alabama has made two bowl appearances since moving up to the Football Bowl Subdivision in 2013.

Mississippi State is the only Power Five team the Jaguars beat last season, but they’ve had a knack under head coach Joey Jones for putting up a fight against some of the better teams on their schedule. South Alabama gave Tennessee a scare in a 31-24 loss in 2013 and has beaten San Diego State each of the past two seasons.

But the Jaguars’ latest trip to the Magnolia State is more than enough of a warning for Ole Miss, which last lost to a non-Power Five team just two seasons ago.

South Alabama held a Mississippi State team that rolled up 55 points on Ole Miss last season to just 382 total yards. It was a sample of how stingy the Jaguars proved to be for most of the season on the defensive side of the ball as South Alabama ranked ninth nationally in pass defense, 53rd in total defense and 56th in scoring defense.

The Jaguars have some key pieces back from that defense in junior linebacker Darrell Songy, who led South Alabama with 100 tackles, and first-team All-Sun Belt safety Jeremy Reaves, who was third with 85 stops.

South Alabama also has some experience back on offense starting with its top two skill position players. Junior Xavier Johnson averaged 5.5 yards a carry and scored 10 rushing touchdowns last season while also catching 13 passes, proving to be a reliable playmaker the Jaguars will likely lean on early in 2017 with youth at quarterback in Dallas Davis, who passed for 2,706 yards and 11 touchdowns last season as a freshman but also threw 12 interceptions.

Johnson and the rest of South Alabama’s ball carriers will be the first test for an Ole Miss defense that’s trying to find itself again under first-year coordinator Wesley McGriff after bottoming out last season, including finishing 120th nationally against the run. But South Alabama had the same defensive flaw last season (100th in run defense), which could open things up for Ole Miss quarterback Shea Patterson and another talented group of receivers if the Rebels can find success on the ground.