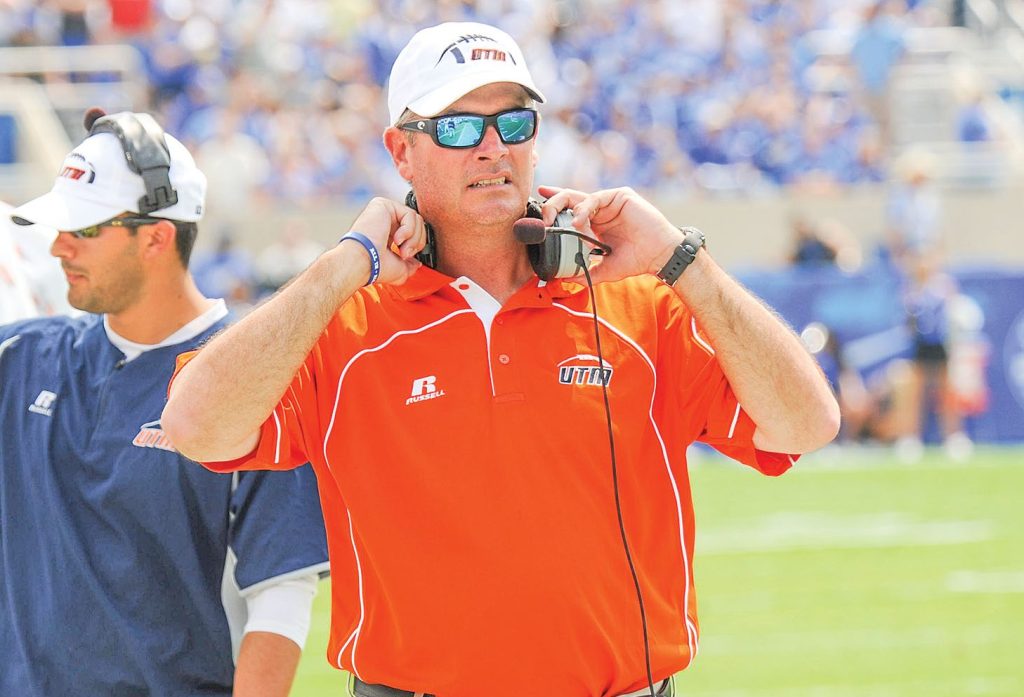 UT Martin coach Jason Simpson has led his team to success in the Ohio Valley Conference, but the FCS-member Skyhawks have recently been overwhelmed by SEC opponents. (Nathan Morgan/UT Martin University Relations)

WRITER’S NOTE: This is the second of a 12-part series breaking down each of Ole Miss’ opponents for the 2017 season.

Winning the first two games would go a long way for Ole Miss in its quest to avoid back-to-back losing seasons under Hugh Freeze this fall.

After its season opener against South Alabama on Sept. 2, Ole Miss will play host to its only Football Championship Subdivision opponent a week later. It’s one the Rebels know well as the University of Tennessee at Martin will visit Vaught-Hemingway Stadium for the second time in three years.

Ole Miss didn’t break much of a sweat against the Skyhawks in 2015, scoring the game’s first 55 points en route to a 76-3 win, rolling up nearly 670 yards and putting up the most points since 1935. Players have come and gone since then, though there’s always a talent gap when FCS teams are involved.

But UT Martin has been strong against teams its own size.

The Skyhawks followed up a third-place finish in the Ohio Valley Conference in 2015 by finishing second in the conference a season ago. UT Martin averaged 32.2 points a game and gave up just 24 per game, good enough for 35th in the FCS.

UT Martin returns seven starters from last year’s defense, including its top two tacklers in first-team All-OVC safety Kahlid Hagens (93) and linebacker Kevin Prather Jr. (71). The Skyhawks are losing more than half their starters on the other side of the ball but do return senior quarterback Troy Cook, who threw for 2,321 yards and nearly twice as many touchdowns (22) as interceptions (12) last season.

But the Skyhawks are 0-7 against Southeastern Conference teams under 12th-year head coach Jason Simpson, and most of them haven’t been close. The Skyhawks have lost their last four games against SEC competition by an average of 45.5 points.

Ole Miss still has the kind of offensive firepower that should overwhelm a team like UT Martin. No offense to UT Martin, but if the Rebels aren’t able to handle the Skyhawks with ease again, they could be in for another long season.