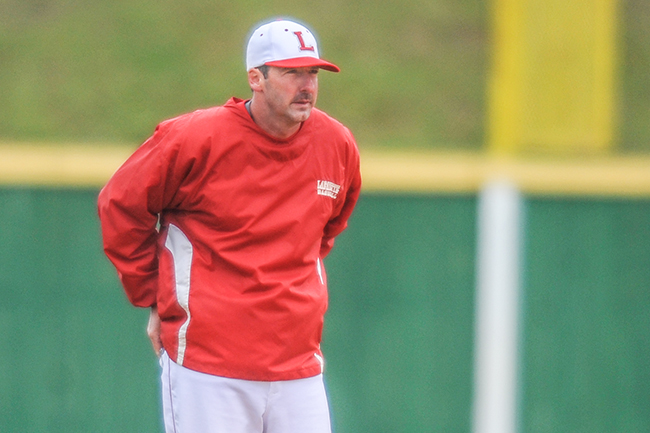 Lafayette High coach Greg Lewis, coaching third base against Water Valley in Oxford, Miss. on Saturday, March 19, 2016. Lewis was named the new athletic director at Lafayette High School on June 28 during the Lafayette School Board meeting.

Lafayette High’s search for a new athletic director lasted a little over a month and did not have to go far to find their man. Greg Lewis was named to the post, replacing Gary Drewery who retired after the school year ended in May, during last week’s June school board meeting. Lewis was approved with a 3-1 vote — one member abstained — and was made official on June 29.

It is not a completely foreign job to Lewis, who has spent the last three years as the assistant athletic director under Drewery. Taking the new job also meant giving up his post as the head coach of the baseball team, where he had returned to coaching the past two seasons.

“I had to give (coaching baseball) up to come to this position, but it’s a good move,” Lewis said. “It’s a good move for our family and to be a part of this at the same time. It’s a great move. …After being the assistant AD, you want to move up to that next level afterwards. Of course, I love coaching baseball at the same time, but just comes a time with three girls at home. It freed me up a bit, too.”

Lewis comes into the job at an interesting time for Lafayette, who is also in a transition of their own as an athletics program. The Commodores will be a member of MHSAA’s 5A classification beginning in August. It is the first time Lafayette has been higher than Class 4A. This added caveat was something Lewis viewed as a challenge, but one he welcomed.

“I know the coaches. Know what’s going on and have been working in this system the past three years,” Lewis said. “I’m just a little time compressed right now trying to get this situated. I look forward to it. All of our sports are in a good place with the coaches we have.”

With Lewis vacating his position as the head coach of the baseball team, he is now tasked with finding someone to fill it. He said he already has about five candidates he plans to interview in the next week or so and hinted that current assistant coach Josh Reagan might be in the mix. Lewis also has to find a new assistant coach after Adam Sowell took a job at Hernando.

“I want to win state championships, but I also want the coaches to keep growing,” Lewis said of his goals. “You’d love to win the all-sports award and to me those are all goals and to keep setting up these student athletes for success at the next level.”