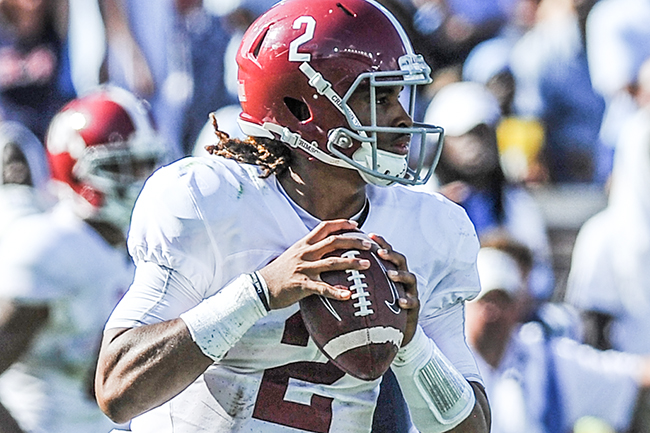 WRITER’S NOTE: This is the fourth of a 12-part series breaking down each of Ole Miss’ opponents for the 2017 season.

Lose a bunch of players to the NFL Draft. Replace those players with another wave of five-star recruits. Rinse. Repeat.

It’s what every Southeastern Conference team has to deal with when playing Alabama, and it’ll be the first league test for Ole Miss this coming season.

The Rebels will get a week off following their trip to California before continuing their early three-game road swing Sept. 30 with their first trip to Tuscaloosa since getting out of Bryant-Denny Stadium with a 43-37 win two years ago. The Rebels again put up a bunch of yards and points against Alabama last season in Oxford before losing a 24-3 lead in a 48-43 setback.

Alabama lost 10 players to the draft off last year’s SEC championship team, setting a school record for the common draft era, but the expectation is for the depth head coach Nick Saban has built with No. 1 recruiting class on top of No. 1 recruiting class to keep the Crimson Tide’s machine running smoothly despite some changes within the coaching staff.

Steve Sarkisian’s time as Alabama’s offensive coordinator didn’t last past the Tide’s national championship loss to Clemson with Sarkisian bolting to take the same position with the NFL’s Atlanta Falcons. Saban reached into the professional ranks to get his replacement in Brian Daboll, who was most recently the tight ends coach for the defending Super Bowl champion New England Patriots and already had a connection with Alabama’s coach after serving as a graduate assistant under Saban at Michigan State in the late 1990s.

Jeremy Pruitt is back for his second year as the Tide’s defensive coordinator, but coaches are only as good as the talent they’ve assembled on the recruiting trail. And Alabama’s still got plenty.

Jonathan Allen, Dalvin Tomlinson, Tim Williams, Ryan Anderson, Reuben Foster and Marlon Humphrey are no longer around on a defense that gave up the nation’s fewest points and finished second in total defense a season ago, but rush specialist Rashaan Evans and defensive tackle Da’Ron Payne could emerge as the next household names for the unit. One of them already exists in the secondary in All-American safety Minkah Fitzpatrick, who makes a strong case as the best defensive back in the SEC after pulling down six interceptions and breaking up seven passes as a sophomore.

On the other side of the ball, Jalen Hurts is back at quarterback to operate Daboll’s offense after completing nearly 63 percent of his passes for 2,780 yards and 23 touchdowns with nine interceptions last season as a true freshman. He also ran for 954 yards and added a team-best 13 rushing touchdowns.

Hurts will have plenty of help from the Tide’s 1-2 backfield punch of Damien Harris and Bo Scarbrough. Harris led the Tide with 1,037 yards and averaged 7.1 yards a carry last season while the 6-foot-2, 230-pound Scarbrough offers a change of pace with a bruising running style that produced 812 yards and 11 rushing touchdowns a season ago.

Hurts will have to find some more reliable targets with ArDarius Stewart and tight end O.J. Howard also gone to the NFL, but speedster Calvin Ridley is back for what could be his final season after leading Alabama in receptions (72) a year ago with seven of them going for scores.

Ole Miss has been one of the few teams that’s been able to exploit Alabama’s secondary with big plays in the passing game for quick scores — a necessity against a defense as stingy as the Tide’s annually is — but turnovers have told the tale for Ole Miss in the last three meetings. The Rebels finished a combined plus-6 in that department in wins in 2014 and 2015 while losing the turnover battle 2-1 in last year’s loss to the eventual national runner-up — games that were all decided by one possession.