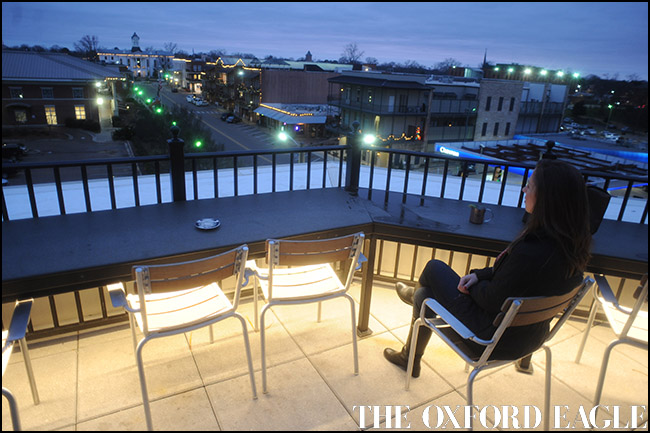 Rebecca Proctor looks out over North Lamar from the rooftop of The Graduate in Oxford on Tuesday, Dec. 29, 2015. The area has become a popular place to hang out near the Square. (Photo/Bruce Newman)

A request from the Graduate Hotel to remove the existing blue and white fabric canopy awning over the balcony area of The Coop restaurant was tabled by the Courthouse Square Historic Preservation Commission on Wednesday afternoon.

The hotel wants to remove the fabric awning and replace it with a permanent metal open air shade structure. The proposed structure would have steel tubes painted black and framed with steel columns. Wooden frames would be installed on the top of the steel structure. The new structure is planned to be the same height as the existing canopy but would extend to cover the entire length of the balcony.

Architectural consultant Tiffany Hatcher Smith said the proposed structure would have less of a visual impact than the blue and white awning and that since the hotel is not historical, the change would “not harm any architectural feature” of the building or negatively impact the district.

However, most of the discussion from the commission focused on the massing and aesthetics of the proposed structure and felt it was too large and was difficult to visualize. The commission unanimously voted to table the request to allow architects with A2H, LLC to return with more detailed drawings.