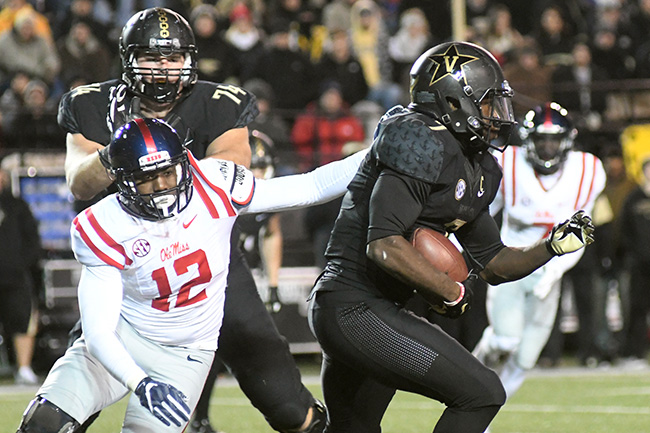 WRITER’S NOTE: This is the sixth in a 12-part series breaking down each of Ole Miss’ opponents for the 2017 season.

They may be of the baby variety, but Vanderbilt is taking steps under Derek Mason.

The Commodores are just 13-24 under the direction of their fourth-year head coach, though each season has been incrementally better than the last. Vanderbilt has increased its win total each season since Mason arrived and played in a bowl game for the first time in his tenure last season after going 6-6 in the regular season.

Vanderbilt will try for its first winning season under Mason this year and gets a familiar opponent in Ole Miss at the midway point. The Commodores, Ole Miss’ permanent opponent from the SEC East, will make the trip to Vaught-Hemingway Stadium on Oct. 14 to start a three-game homestand for the Rebels.

Vanderbilt has caused headaches for Ole Miss of late. The Rebels pulled out an 11-point win over Vanderbilt at home in 2015 but were blitzed by the Commodores last November, 38-17, as Vanderbilt won four of its final six games.

Not surprisingly, the Commodores’ strength has been defense under Mason, who spent four seasons coaching Stanford’s defense before taking over at Vanderbilt in 2014. Vanderbilt was 35th nationally in scoring defense, 57th against the run and 64th in total defense but was vulnerable through the air last season, finishing 83rd against the pass.

It won’t be easy for Vanderbilt to replace All-American linebacker Zach Cunningham, who led the conference with 125 tackles a season ago before the Houston Texans snatched him up in the second round of this year’s NFL Draft. No other Commodore had more than 76 tackles a season ago, though Vanderbilt returns three of its next four top tacklers in LaDarius Wiley, Ryan White and Oren Burks.

The problem for Vanderbilt has been producing consistent offense, particularly through the air. Senior running back Ralph Webb is the Commodores’ catalyst, needing 658 rushing yards to become just the eighth player in SEC history to reach 4,000 for a career. Webb, Vanderbilt’s all-time leading rusher, ran for 1,283 yards a season ago.

But Webb will have to get far more help from a passing game that’s lacked explosiveness throughout Mason’s tenure if Vanderbilt’s offense is going to take the next step. That starts with the play of quarterback Kyle Shurmur, who threw for 2,409 yards as a sophomore last season but tossed more interceptions (10) than touchdowns (9) for an offense that finished 100th nationally in passing yards.

Shurmur completed 61.2 percent of his passes and threw for 1,162 yards in the final month of the regular season, the kind of improvement he’ll need to build on to make Vanderbilt’s offense a more viable threat against SEC defenses.