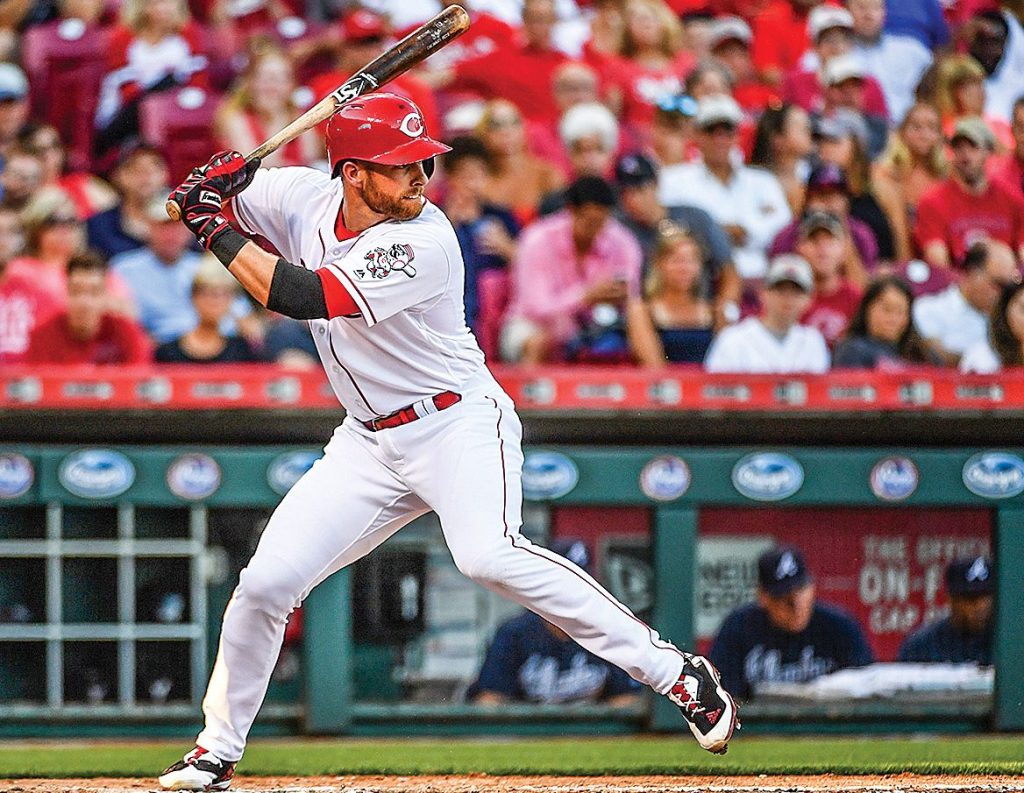 Cincinnati Reds shortstop Zack Cozart will make his first All-Star Game appearance this year after a breakout first half of the season that has the former Ole Miss standout on pace to set career-highs in several offensive categories. (The Cincinnati Reds)

Zack Cozart knew what it meant when Cincinnati Reds manager Bryan Price called him and teammate Joey Votto into his office last Sunday before the team’s series finale against the Chicago Cubs.

Price informed both that they would represent the National League in the MLB All-Star Game, but that wasn’t all.

It’s an individual dream that’s starting to give way to reality for the former Ole Miss standout.

Cozart’s first All-Star nod comes in the midst of what is by far the best season of his seven-year MLB career. Cozart began the weekend leading all National League shortstops in batting average (.318) and OPS (.944), putting him on pace to set career highs in both categories as well as runs, hits, home runs and RBIs.

Cozart got off to a torrid start, hitting .352 in April and .344 in May while carrying a .337 average into the second half of June. His newfound offensive success made an All-Star nod a foregone conclusion, but Cozart still had to get enough votes from fans nationwide to earn a start. That meant fending off Dodgers shortstop Corey Seager and the pull of a much larger Los Angeles market.

Seager cut into Cozart’s 200,000-vote lead during the final week of voting, but it wasn’t enough to surpass Cozart, who received more than 1,915,000 votes to lead all National League shortstops.

“I was shocked that I was a starter, but that just shows you I guess the fans in Cincy and outside of Cincy, they thought I was having a good enough year to start,” Cozart said. “It’s pretty cool.”

A four-game series with the Colorado Rockies and a three-game weekend series that ends today with the Arizona Diamondbacks have helped keep Cozart’s mind occupied this week, but it’s also wandered. His wife, Chelsea, and his son, Cooper, along with his parents and a handful of other immediate family members will be in attendance Tuesday in Miami when Cozart is officially introduced as a starter in front of a national television audience alongside some of the sport’s biggest names, including Giants catcher Buster Posey and Nationals star Bryce Harper.

“It’s going to be crazy because I’m usually at home watching the Home Run Derby and watching the game and rooting on my teammates that I play with that are there,” Cozart says. “It’s going to be just really exciting to have my family there and to play with a group of guys that I’ve always looked at as the best players in the game and never put myself in that category. That’ll be one of those things I’ll never forget.”

Getting to this point hasn’t been easy for Cozart even if the potential has always been there.

He starred at Ole Miss from 2005-07, becoming the first shortstop under head coach Mike Bianco to start as a true freshman. He earned All-America honors with the Rebels before the Reds took him in the second round of the 2007 MLB Draft.

Cozart’s glovework — he’s yet to post a fielding percentage lower than .975 in a season — got him to the big leagues in 2011. He doesn’t mind being labeled a defensive-minded shortstop because “I always told myself that was the most important thing, to go out there and make every play on defense,” he says, but he wanted to be better with the bat than what his numbers showed — a career .246 hitter whose highest average before this season was .258 in 2015.

Even that didn’t come in a full season as Cozart was limited to just 53 games that year after tearing two ligaments in his right knee as well as the biceps tendon. He played in just 121 of the Reds’ 162 games last season as more injuries shuffled him in and out of the lineup.

Save for a recent trip to the disabled list because of a tweaked quad, Cozart has been healthy this season, but there have been other distractions. Cozart’s banner year has made him a hot name in trade rumors with the Reds in last place in the National League’s Central Division as the trade deadline approaches at the end of the month.

“He’s been through a lot,” Price said, according to reds.com. “His name has been out there as far as a trade candidate or free agency and all this other stuff, and he’s handled it extremely well and just really focused. As he said, he’s just here to play baseball. He’s doing a heck of a job of that.”

For now at least, Cozart is still in Cincinnati, where he’s using a tweak to his batting stance to help drive the best numbers of his career. He has lowered his hands in an effort to eliminate unnecessary movement and simplify his approach.

Cozart’s alteration resulted in a home run in his first at-bat in spring training, giving him as good a reason as any to stick with it. Nine of his 32 extra-base hits are home runs, putting him just seven away from his career-high, while his 34 RBIs are more than halfway to the career-best 63 he tallied in 2013. He’s also on pace to double his career walk rate.

“You can go all the way back to when I was at Ole Miss, I had my hands high when I would start (my swing),” Cozart says. “When I was struggling, I always had tension in my upper body and my hands. I just deciced along with my hitting guys here that I wanted to take that tension away, so I just started putting my bat on my shoulder and then hitting from there.

“I just basically go up there and my only thought is to get a good pitch to hit and put a good swing on it. I’m not thinking about any extra things up there. It takes all that mental part of it out of the way, which is the easiest way to hit.”

It’s all helped Cozart morph into one of baseball’s best. Now he’s got an All-Star nod to prove it.