A decade after ‘it didn’t work’ at Ole Miss, Ed Orgeron using lessons learned to drive second chance at LSU 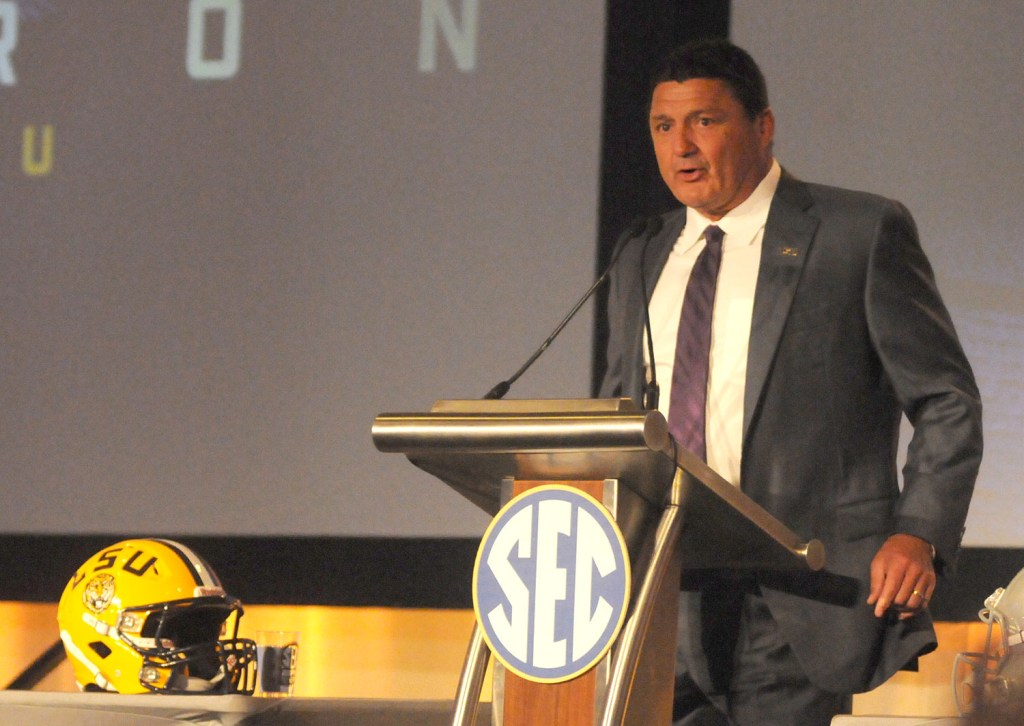 LSU coach Ed Orgeron speaks during SEC Media Days on Monday at The Wynfrey Hotel in Hoover, Ala. (Davis Potter)

HOOVER, Ala. — Ed Orgeron knows why his only other permanent head coaching job went up in flames, and he’s determined to do everything he can to keep from repeating the burn.

It’s been a decade since Orgeron was fired after just three seasons at Ole Miss, a tenure that was as tumultuous as it was brief with the Rebels winning just 10 games during that span and going through a winless Southeastern Conference season in 2007 that sealed Orgeron’s fate.

It got to that point, Orgeron said, because of too much yelling and not enough trusting from a guy who had spent his entire career as a position coach before that and didn’t know any different. Long, grueling practices took a toll on players, and the habit of meddling with every position on the field was hard to break.

“I wasn’t ready,” Orgeron said Monday during the first day of SEC Media Days, where he’s now representing LSU. “I did the things that I did as a defensive line coach and was very successful over the years. It didn’t work at Ole Miss.”

After a brief stint with the NFL’s New Orleans Saints and stops at Tennessee, Southern Cal and LSU, Orgeron has his second permanent head job with the Tigers, another chance he told a mentor during a phone conversation the day he left Ole Miss he would get. But not before making some changes.

Two were at the top of the list: treat his players “no different” than he would his sons, he said, and get out of his assistants’ way. Orgeron’s experience got him the interim job at USC in 2013 when Lane Kiffin was fired and again last year at LSU when Les Miles was let go just four games in.

USC and LSU won 12 of the 16 games Orgeron coached.

“Ever since those two minor changes, we’ve been 12-4, so that’s the difference,” Orgeron said.

Yet Orgeron expressed gratitude for Ole Miss giving him his first experience running his own program, mostly for the lessons he learned going through it. His players are equally as appreciative because they’ve already seen evidence of the changes Orgeron vowed to make.

“We’ve been ecstatic,” LSU defensive end Christian LaCouture said. “In the spring, we weren’t practicing as long, but we were getting the same amount of work. It’s more up-tempo and quick. It’s two hours. You’re in, you’re out and you’re done.”

It’s all they really needed to see from Orgeron, who’s rarely had the passion for what he does questioned. A fiercely proud Cajun who grew up less than 120 miles from Baton Rouge in Larose, Orgeron refers to LSU as his dream job.

After leading the Tigers to a 6-2 record the rest of the way last season, including wins over Ole Miss, Arkansas and Texas A&M, his players wanted him to keep it.

“When I realized he became my interim head coach and the way he treated me personally and also treated the team and how I saw that it meant a lot to him, I was like, ‘There is no way you can bring someone else in and give it to them.’’

Being at LSU means Orgeron will face his former team every season. It also means going up against some of the best teams in the country starting with annual SEC behemoth Alabama. One of the games LSU didn’t win with Orgeron at the helm last season was against the Crimson Tide, who will take a six-game series winning streak into this year’s November matchup.

Orgeron knows he’ll have to beat Alabama and a bunch of other teams if he wants to last longer than he did in Oxford. At age 55, it may be his last shot to show his head coaching worth.

“I don’t feel the pressure, but I do acknowledge that it’s out there,” Orgeron said. “I still need to prove that now I’m the head coach and we need to win. I get that.”