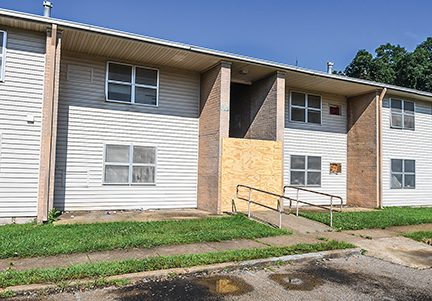 Bruce Newman The entrances to buildings at Riverside Place have been closed and residents have relocated.

All 86 families living at Riverside Place public housing complex when it was announced the contract between Oxford and the U.S. Department of Housing and Urban Development would not be renewed and the doors to the apartments would be closed for good, have all found new homes.

According to Teasha Sanders, head of occupancy for the Oxford Housing Authority, as of Tuesday, two families still remained at Riverside; however, they both have signed leases with August move-in dates.

“This process has not been easy, but we are so proud of the community, participating landlords and the local charitable organizations that have helped make this transition a success,” Sanders said Friday.

The contract ended Feb. 28. Residents are being issued rent vouchers, paid directly to the landlords, to find housing wherever they’d like to live. The vouchers can be used in any state as long as the landlord participates in the voucher program.

Sanders said the majority of the Riverside families decided to stay locally and have relocated to homes in Oxford.

“I’m happy to say that through collective efforts this transition took place in a relatively short time period,” she said. “Interfaith Compassion Ministries took the lead in meeting with local churches and fundraising on behalf of the families at Riverside. We are grateful to the participating landlords and all those in the community that has supported our efforts.”

Sanders said the process hasn’t always been an easy one and sometimes made more difficult by people in the community who felt Oxford was pushing Riverside residents out of Oxford with the lack of affordable housing.

“In the beginning, there were many who did not think it could be done,” she said. “Others questioned whether the voucher program should be done. Our ultimate goal was to offer better living conditions to the families living in Riverside Place. Ultimately, all we’ve striven to do is enhance the lives of those we serve.”

HUD has been moving away from the brick and mortar public housing complexes and opting to use the vouchers in more and more cities across the country, to allow people with financial struggles to live in their communities and not just lumped together in one complex.

The vouchers pay up to $1,100 a month for a three bedroom apartment or house, as long as the resident meets the financial requirements for assistance.

“I can’t count how many families have shown me pictures of their new homes,” Sanders said. “They’ve invited me over to see how they’ve decorated. They are excited and proud to have the opportunity to live in different communities throughout Oxford.”