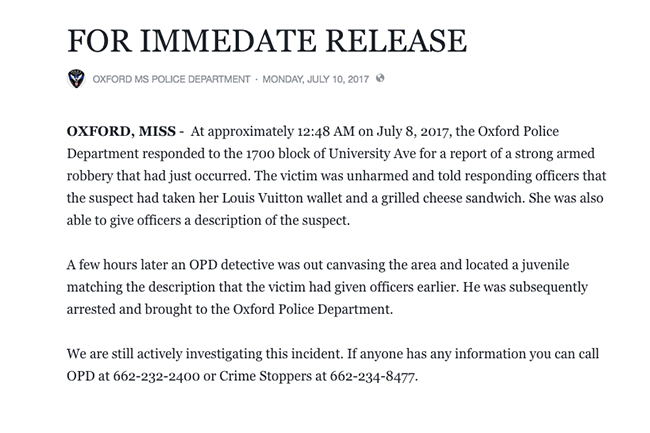 The Oxford Police Department took a juvenile into custody, arrested for robbing a woman of her Louis Vuitton wallet and a grilled cheese sandwich over the weekend.

According to an OPD press release, at approximately 12:48 a.m. Saturday, OPD officers responded to the 1700 block of University Avenue for a report of a strong armed robbery that had occurred. The victim, who was unharmed, told the responding officers that the suspect had taken her wallet and sandwich. She gave officers a description of the subject and a few hours later, an OPD detective was canvassing the area and located a juvenile matching the description the victim had given the officers earlier.

The juvenile was arrested and brought to the OPD. The incident is still be actively investigated at this time. If anyone has any information, they are asked to call the OPD at 662-232-2400 or Crime Stoppers at 662-234-8477.