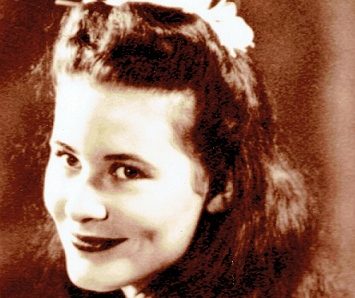 Mama, the summer before her senior year in high school.

If only I could ask Mama one more question…

In the days and weeks after her funeral I spent hours sorting through the considerable amount of stuff she left behind. Most of it was destined to be disposed of in one way or another, but I tried to be selective. These were, after all, the accumulated keepsakes of a long lifetime. They deserved my attention.

So when I came across her Smoke Rings, the annual from Duncan, Okla., High School, Class of 1946, I gave it careful scrutiny. I noted her activities: Student Council two years, including one as secretary; senior play; junior play; junior class editor for the annual.

And there, on Page 23, in the Last Will and Testament, was this:

It’s tempting at times to think of our parents as having spontaneously sprung into existence just in time to serve their primary purpose in life: producing us.

Not so, of course. They had lives and loves and laughs long before we complicated things. Mama used to talk from time to time about her early years, with the softened perspective that comes with age.

But none of her tales touched on her “hubba hubba.” So I set about trying to find someone who might shed some light on the subject.

As you might imagine, the 71 years since graduation have thinned the ranks of the Duncan High School Class of ’46 a good bit. But I managed to speak to two.

Charlene Sullivan, then Charlene Schick, was the editor of the Smoke Rings. “Your mother was one of my helpers,” she told me. “We were good friends.”

Ms. Sullivan couldn’t provide a specific explanation for the last will’s hubba hubba reference to Mama. But she gave me a dictionary definition for the term.

“Used especially during World War II to express enthusiastic approval for an attractive girl or woman,” she said. Alternately, she added, “People used to use that all the time when they wanted to hurry up; they’d say, ‘hubba hubba.’”

I don’t know whether Mama was given, in those days, to urging her classmates to make haste. But she was indeed a looker. Another classmate, Hester Blair, then Hester Murphree, suggested that may well have been the inspiration.

“That ‘hubba hubba,’ that was for pretty girls,” she told me. “And your mama was very attractive. She was a lady. She dressed proper; she was just a fine person.”

Of course, Edna Ruth Henry, Mama’s hubba hubba inheritor and a year behind her in school, might have been ideal for an explanation. But efforts to reach her, if indeed she is still among the living, came to naught.

Likewise, the fellow responsible for the will could certainly have provided an answer. He went on to a career in journalism, Ms. Sullivan told me. Alas, it would definitely take a spirit medium to contact him.

As it would to pose the question to Mama now. So the mystery remains.

But one thing I like to think: that when Daddy first laid eyes on Mama, “hubba hubba” is what popped into his head.