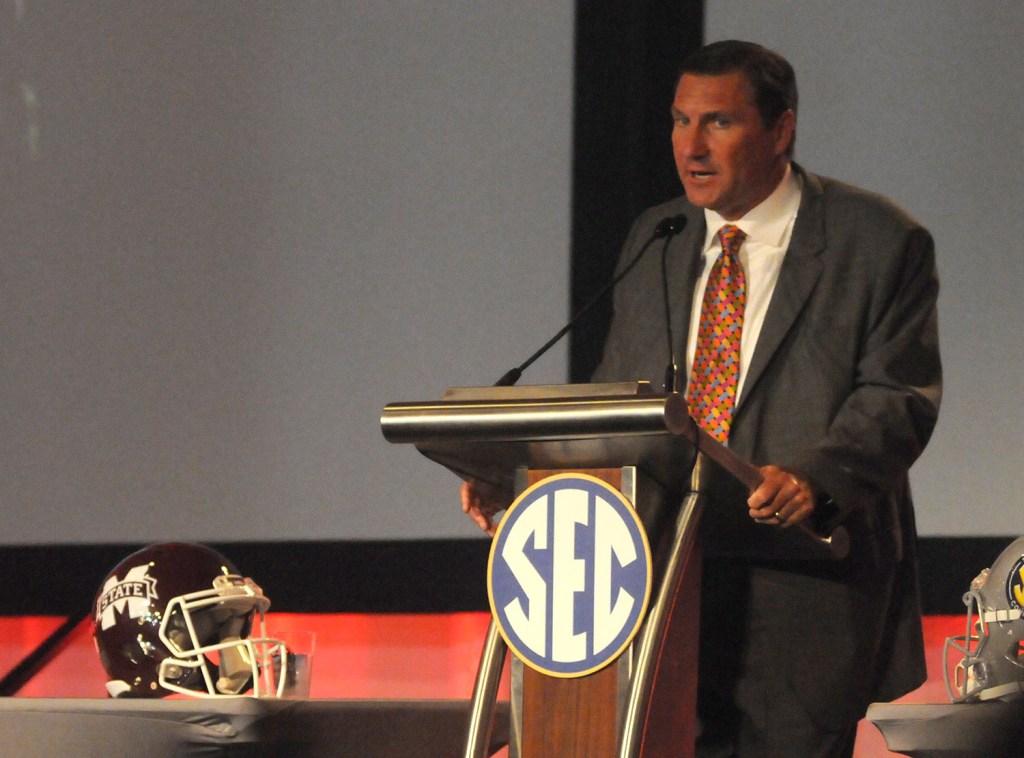 HOOVER, Ala. — Dan Mullen is something of a quarterback whisperer. At least that’s the reputation of Mississippi State’s ninth-year coach.

From Alex Smith to Tim Tebow to Dak Prescott and now Nick Fitzgerald, Mullen has gotten the most out of his signal callers at every stop throughout his coaching career. Smith, the Kansas City Chiefs’ quarterback, and Tebow, who played briefly in the NFL before trying his hand at professional baseball, were both quarterbacks under Mullen when he was the offensive coordinator at Utah and Florida, respectively, while Prescott was a two-year starter at MSU before becoming the NFL’s Offensive Rookie of the Year last season with the Dallas Cowboys.

So what does Mullen look for when recruiting quarterbacks? It’s a wide-ranging answer.

“The biggest thing is you’ve got to watch them on film,” Mullen said. “You’ve got to be able to sit down and talk to them. All of them, you try to get to camp if you can within a camp where you actually get to coach them and work with them one on one.”

It’s an important step for Mullen given that he’s not always dealing with blue-chip prospects.

Tebow was the only one out of that group with a rating higher than three stars during the recruiting process. The 2007 Heisman Trophy wasn’t a surprising development for the former five-star signee, but Mullen preceded his time at Florida by tutoring Smith, who began his career at Utah as a lightly recruited prospect and ended it being the Mountain West Conference Player of the Year with a fourth-place finish in the 2004 Heisman Trophy voting before becoming a first-round draft pick.

Taking the head coaching job at Mississippi State in 2009 came with its own recruiting challenges. Going up against SEC powers such as Alabama, Auburn and LSU in his own division, Mullen signed Prescott out of Louisiana’s Haughton High School in 2011 when most Power Five programs passed on the three-star prospect. Prescott turned into arguably the school’s most decorated player over his final three seasons, accounting for 114 touchdowns and leading the Bulldogs to their first-ever No. 1 national ranking in 2014 before the Cowboys took him in the fourth round of the NFL Draft.

Mullen said getting to know a quarterback beyond his physical abilities is key.

Fitzgerald is Mullen’s latest project. Another unheralded signee, Fitzgerald came to Mississippi State with the size — he’s 6-foot-5 and up to 230 pounds — but lacking polish as a triple-option quarterback in high school.

He redshirted in 2014, sat behind Prescott in 2015 and burst onto the scene as Prescott’s successor last season, leading the SEC in total offense (3,798 yards) and rushing touchdowns (16). There’s still plenty of room to improve in the passing game — he completed just 54.3 percent of his passes last season — but that’s one of the many natural progressions Mullen expects Fitzgerald to make as he moves into his second full season as an SEC starter.

“How quick can I get the ball out of my hands in a bubble screen when it’s there?” Mullen said. “How can I stay in the pocket a half a second longer or slide the throwing lane to make an easier throw for me? Those are skills that are developed over a very long period of time, and the more you develop on them, the more successful you’ll be as a quarterback.”

Mullen admitted there are different ways to mold a quarterback, and that should be done based on what gives the signal caller the best chance to be successful in his particular offense. Because winning, Mullen said, is all that matters.

“Do they have those traits of being a winner?” Mullen said. “If you want to look at a quarterback, a big trait is does he win, and all of those guys that we talked about all had tremendous success at every level that they played football at.”