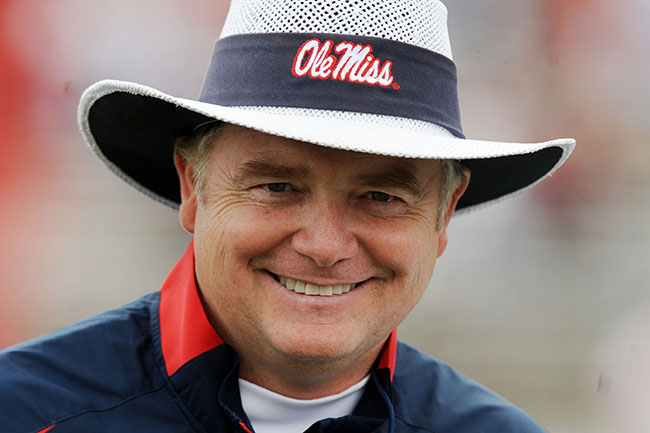 Former Ole Miss head coach Houston Nutt has a lawsuit against the University of Mississippi.

Nutt suggests he can’t get a coaching job due to damage inflicted by Ole Miss and he is seeking damages for lost wages, emotional distress, embarrassment, attorneys fees and punitive damages.

Nutt’s lawsuit, filed by his attorney, Thomas Mars, was filed today in the United States District Court for the Northern District of Mississippi against Ole Miss, the Ole Miss Athletics Foundation and the Board of Trustees of Higher Learning of Mississippi.

Nutt’s lawsuit is related to the NCAA investigation of the Ole Miss football program. He claims the university’s athletics department worked to pin problems with the football program on him.

From the filing today in Oxford federal court: “Determined to deflect and delay the potential damage from the NCAA investigation, and with the knowledge and tacit approval of certain members of the Ole Miss Control Group, Coach (Hugh) Freeze, AD (Ross) Bjork, and (Kyle) Campbell reached an agreement in 2014 to carry out a carefully orchestrated misinformation campaign, the specific purpose of which was to mislead the media, Ole Miss boosters, and potential recruiting prospects about the true nature of the matters that were being investigated by the NCAA.

“This deceitful strategy involved having Coach Freeze, AD Bjork, and other members of the Ole Miss Athletics Department tell sports journalists “off the record” that the “majority,” “most,” or “almost all” of the NCAA’s allegations were aimed at Coach Nutt and his staff and that the NCAA’s charges had little, if anything, to do with Coach Freeze. As further alleged below, Coach Freeze personally carried out this part of the strategy at various times from 2014 to 2017, reaching new heights when Coach Freeze courted the entire 2016 recruiting class under false and misleading pretenses.”

Lee Tyner, general counsel for Ole Miss, said in a statement Wednesday afternoon the school had yet to be served with the lawsuit but is aware that it’s been filed.

“We were provided a copy a short time ago,” Tyner said. “We will carefully review Coach Nutt’s claims and respond in due course.”

“It is common knowledge among sports journalists that Coach Freeze does not take kindly to criticism,” the lawsuit reads. “Since the moment the NCAA investigation was first made public, Coach Freeze has distinguished himself from other Division 1 head football coaches by: (a) consistently exhibiting behaviors that are massively defensive; 3 (b) going to extraordinary lengths through social media and otherwise to promote his self-image as a deeply spiritual Godly man who’s done nothing wrong and is being persecuted; 4 and (c) attempting to cultivate personal relationships with sports journalists for the purpose of promoting his self-image through positive news stories and, as further alleged below, exploiting their trust and deliberately misleading them into tweeting and writing news stories that furthered Coach Freeze’s agenda.

You can read the full lawsuit filing here.