KNOW YOUR FOE: Improved Kentucky back on Ole Miss’ schedule 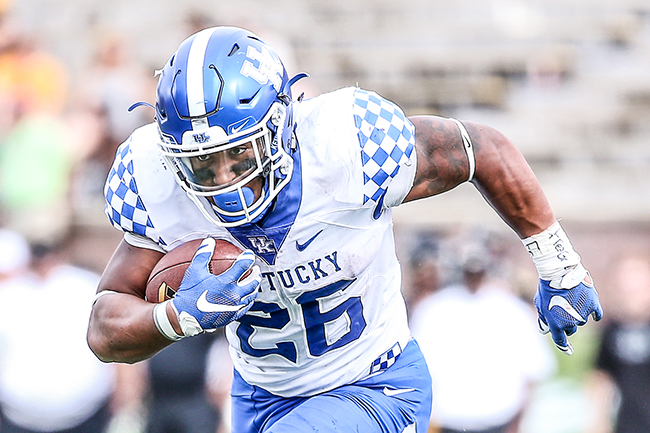 WRITER’S NOTE: This is the ninth of a 12-part series breaking down each of Ole Miss’ opponents for the 2017 season.

Ole Miss’ 2017 season will bring a new Southeastern Conference opponent along with it.

The Rebels will make a trip to the Bluegrass State on Nov. 4 to take on Kentucky thanks to the SEC’s rotating cross-divisional scheduling format implemented in recent years. Ole Miss hasn’t played the Wildcats since a 2011 trip to Lexington that ended in a 30-13 loss in Houston Nutt’s final season as head coach.

Much has changed for both teams since then starting with the coaches. A year after Ole Miss hired Hugh Freeze in 2012, Kentucky brought in Mark Stoops to try to revive a dormant Kentucky program.

It’s been a slow process for the Wildcats, but after three straight losing seasons under Stoops, Kentucky broke through with a 7-5 regular season last year before falling to Georgia Tech in the TaxSlayer Bowl. The Wildcats went 4-4 in SEC play, good enough for a second-place tie in the Eastern Division, and capped the regular season with a 41-38 victory over reigning Heisman Trophy winner Lamar Jackson and in-state rival Louisville.

Kentucky’s offense was average because of a passing game that failed to provide much balance, but the Wildcats’ ground game will test Ole Miss’ run defense. Kentucky was 20th nationally in rushing offense a season ago behind a pair of 1,000-yard rushers in Stanley Williams (1,170) and Benny Snell Jr. (1,091).

Williams is no longer around, leaving Snell as the Wildcats’ featured back this fall. It won’t be a new role for Snell, who led Kentucky in carries last season (186) and averaged 5.9 yards a carry while scoring a team-high 13 rushing touchdowns.

But the Wildcats need a passing game that produced the second-fewest yards per game in the SEC a season ago to come around for the offense to take the next step. A back injury knocked Drew Barker out for the season after just three games, leaving the offense in the hands of junior Stephen Johnson.

Johnson, the more mobile of the two quarterbacks, completed 54.7 percent of his passes over the last nine games for 2,037 yards and 13 touchdowns against six interceptions. He also finished as Kentucky’s fourth-leading rusher with 327 yards and three scores on the ground and looks to be guy behind center for the Wildcats heading into the new campaign.

Garrett Johson led Kentucky’s receiving corps with 39 catches last season and is back along with 6-foot-5 tight end C.J. Conrad, who caught 19 passes for 262 yards with four of those receptions going for touchdowns. But the experienced targets are scarce after that with no other returning player having caught more than 14 passes a season ago.

Kentucky’s defense had mixed results last season, finishing 35th nationally against the pass but struggling to stop much else. The Wildcats were 86th in points allowed, 85th in total defense and 110th against the run.

But the Wildcats have experience on their side with their top four tacklers back from a season ago. Linebacker Jordan Jones and safety Mike Edwards led the way with 109 and 100 stops, respectively, while Courtney Love’s 76 tackles will be back beside Jones on the second level.

The group didn’t take the ball away much last year as Kentucky finished 107th in turnover margin, something the Wildcats will try to improve on this fall.