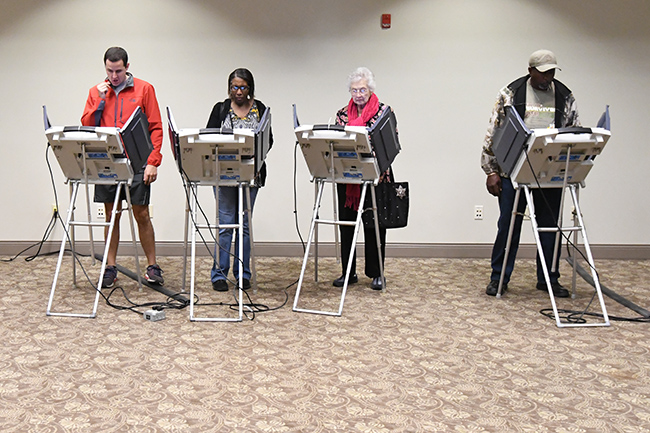 Voters cast their ballots on machines at the Oxford Conference Center in Oxford, Miss. on Tuesday, November 8, 2016.

Election Commissioner Debbie Black told the Lafayette County Board of Supervisors that returning to paper ballots to cast votes would be taking several steps backward, even if it means spending close to a million dollars to replace electronic touch-screen voting machines.

During last week’s budget review with Circuit Court Clerk Baretta Mosley, it was announced the county’s touch-screen machines were starting to break down and would either need to be replaced, or the county could elect to go back to paper ballots.

On Monday, Black and other election commissioners met with the supervisors during another budget meeting and said they’d rather stick with the old machines for another couple of years than return to paper ballots.

“We voted as a commission and if we can’t get the new machines, we would rather stay with them for now,” she said.

“The process takes longer and if an election is contested, we’d have to hand-count every ballot,” Black said.

The election commission is also asking for electronic poll books, which would speed up the process of voters signing in to vote and keep lines shorter. The cost is about $70,000.

Since Tuesday’s meeting was only a budget hearing, no action was taken but supervisors agreed the county could purchase the electronic poll books in the upcoming fiscal year and then look at purchasing the new voting machines next year.

“I’d hate to go into our big election in 2019 with the machines we have now,” said Board President Jeff Busby. “But I don’t want to return to paper ballots.”

Supervisors met with several department heads Tuesday to review their budgets as part of the annual budget process. After all budgets are presented and gone over with the supervisors, any suggested changes are made and the supervisors will vote to approve the entire budget in September.

Buildings and Grounds Supervisor Chris Gatlin asked the supervisors to consider allowing him to budget an additional $70,000 to replace the air handlers at the Lafayette County & Oxford Public Library, and another $3,000 to replace the tile in the upstairs men’s bathroom.

Gatlin said he’d like to remove the aging boiler and replace the units with gas units. The supervisors suggested speaking to the city of Oxford to see if the Board of Aldermen would agree to help with the expense of replacing the heating and air conditioning at the library.

One way to increase revenue would be to issue trade permits, Hollowell said.

The next budget meeting will be on July 18 at 2 p.m. at the Lafayette County Sheriff’s Department.