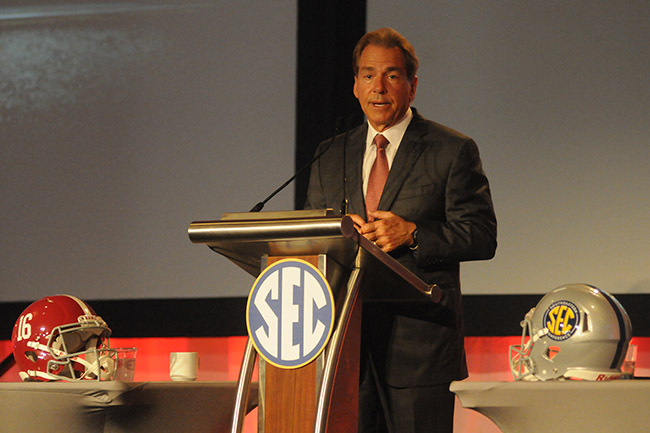 HOOVER, Ala. — If nothing else, Nick Saban may have birthed a new catch phrase.

But Alabama’s coach hopes it proves to be more than words.

The Tide will take a 17-game Southeastern Conference winning streak into this season, but it’s their latest loss — one that came on Deshaun Watson’s 2-yard touchdown pass with 1 second left — that Saban is using as a source of motivation that his team rarely needs.

“It takes a tremendous amount of accountability to be able to execute and sustain the execution for 60 minutes in the game, and we played against a really, really good team, which I think when you get in the playoffs, that should be what you expect,” Saban said. “We weren’t able to finish the game like we needed to.

“I think there’s a lot of lessons to learn, and hopefully we won’t waste a failure.”

That doesn’t mean Alabama will start changing its process under Saban, which has produced the alternative result far more often. The Tide have won 114 of 133 games during Saban’s tenure, including 66 of 78 SEC games, and will go for their fourth straight SEC championship next season.

But at 65 years old, Saban is as competitive as ever. And the reality of losing still eats at him.

“We really try to do it the same way because whether you win or lose. We’re always trying to self-assess to see what we need to do to get better,” Saban said. “I think when you lose, everybody’s much more, the mindset is much more I’m willing to change. I want to learn. I don’t want to waste a failure. What could we have done better? Because everybody’s hurt by the fact that they lost, especially the way we lost that particular game on the last play of the game, but it wasn’t the last play. It’s what led up to the last play.”

Saban’s players said that’s not just coachspeak either. A loss is a loss, and at a place like Alabama, the disappointment is amplified.

“You can learn so much,” center Bradley Bozeman said. “When you do something wrong when you win, you don’t really realize exactly what you did wrong. You’re kind of just wrapped up in the win. But when you lose, you see every little thing.