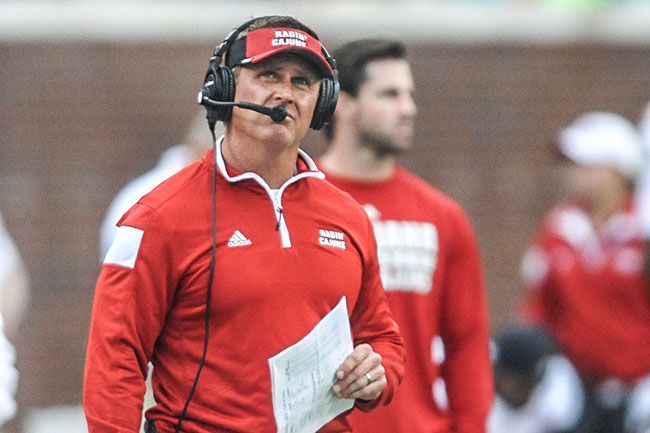 Louisiana-Lafayette coach Mark Hudspeth looks up at the scoreboard against Ole Miss at Vaught-Hemingway Stadium in Oxford, Miss. on Saturday, September 13, 2014.

Ole Miss will take a break from its Southeastern Conference schedule against a familiar opponent this season.

Louisiana-Lafayette will make the trip to Vaught-Hemingway Stadium on Nov. 11 to end a string of six straight league games for the Rebels. It will be the Ragin’ Cajuns’ second trip to Oxford in the last four seasons after the Rebels won the teams’ most recent matchup, 56-15, in 2014.

Louisiana-Lafayette finished in the middle of the pack in the Sun Belt Conference with a 5-3 record last season and went 6-7 overall under seventh-year coach Mark Hudspeth. The Ragin’ Cajuns haven’t beaten a Power Five opponent since 2009.

Louisiana-Lafayette’s strength lied on the defensive side of the ball a season ago, finishing 43rd nationally in total defense and 23rd against the run. The Ragin’ Cajuns held opponents to 129.2 rushing yards per game.

The Ragin’ Cajuns lost their top two tacklers from a season ago but return each of their next three leaders in that department, including defensive backs Travis Crawford and Tracy Walker, who combined for 132 stops last season.

Offensively, Louisiana-Lafayette has to replace Anthony Jennings at quarterback after he completed nearly 60 percent of his passes for 2,178 yards and 11 touchdowns, though that’s an area the Ragin’ Cajuns will try to improve on after finishing 106th in passing offense. Louisiana-Lafayette also struggled to keep the ball away from opponents through the air with 13 interceptions.

Jennings was also a threat with his legs, rushing for a team-best nine scores. Louisiana-Lafayette also has to find a replacement for running back Elijah McGuire, who ran for 1,127 yards and seven touchdowns.

A game similar to a ‘little Johnny Football,’ Ole…